Monday morning I decided to baste my king size quilt (as yet unnamed) on the floor of the dining room. First I washed the floor and then taped about 2/3 of the backing down.  I couldn't quite spread it out all the way.  I used some knee pads that DH had in the garage or my knees would have been toast.  Spreading the batting and the top was no problem.  Then I started pinning.  I was getting hot and tired - it was not a pretty site.  I pinned so good that I used up all my pins and went throughout the house looking for more.  At that point, I decided to do straight stitching on the black squares so I could then take out some pins to use on the remaining 1/3 of the quilt.  So I did that and then it went back on the floor to finish pinning.
The reason I basted it on the floor instead of on my tables is that I wanted to get the backing stretched out better than would be possible on the tables, which wouldn't have been as big as the floor.  The last time I basted a queen size quilt on the table, I spray basted it and I had some problems getting the top placed properly.  Actually, I think I like the pinning method best.  I'll use the spray basting method on smaller quilts that are easier to handle.

I have to give Joanne from Thread Head all the credit for the QAL (quilt-a-long) for this quilt.  I am also borrowing her borders that she used to enlarge her quilt to king size.  Also, I am using her idea for the  quilting in the triangle section of the border.  Thanks to her, I am a lot more comfortable quilting feathers. I can't claim to be very original at all.  The quilting motif for the pieced blocks is the same one I used on my last quilt.  It is easy to do and fit the size of the blocks - that's why I'm using it.  I'm afraid that once I get to this stage, I just want to get it finished!!

One night I woke up about 1:00 AM and started thinking about what I could name the quilt and I thought up what was a pretty good name.   The problem is, I can't remember what it was!  Thanks for the suggestions that came in.  I'll have to think about it some more.

This is the new sign that was just put up at the pond that I walk around in the mornings.  The sun was just barely coming up when I took the picture and it was behind the plaque - that's why the lighting isn't very good. 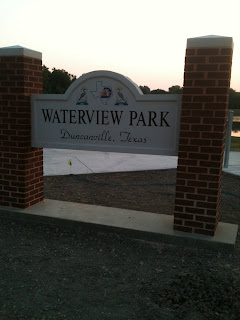 I better get back to quilting.
Posted by Ruth at 9:10 AM