Yesterday I received my doll quilt from Sandy as participants in Lori's doll quilt exchange!  Lori has been doing this for about 7 years and it is such fun!  I love my quilt, made with broken dishes blocks. I am amazed at the variety of fabrics in it and there are only 2 fabrics that I have had in my stash - all the others are new to me.  I just love it! 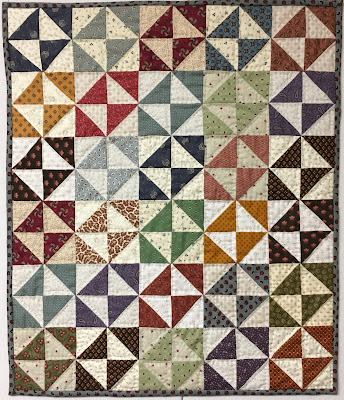 This is the back of the quilt, which has another beautiful fabric on it!  Thanks, Sandy!  She even hand quilted it. 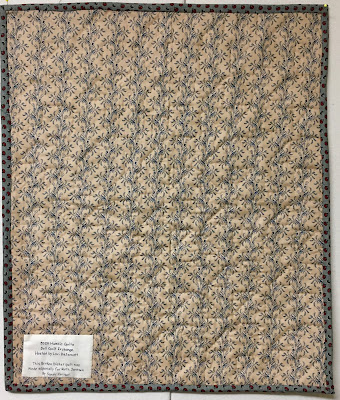 I took this picture early this morning on my favorite chair for taking small quilt pictures.  You can't really see the chair, but I kind of liked the dark shading of the photo. 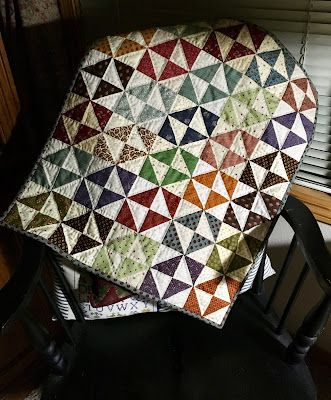 And here is a photo of the doll quilt that I made and sent to Patty.  I machine quilted mine. 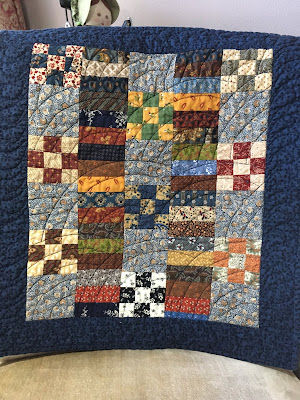 I like to take pictures of doll quilts with a doll model.  This is Albert, my boy doll that had belonged to my Mom. 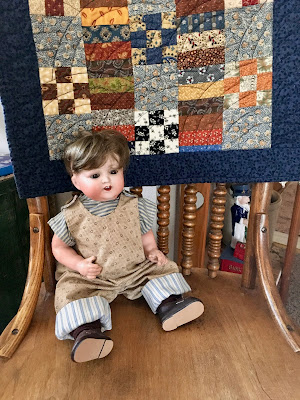 Thanks to Lori for organizing this exchange!!

On to another topic.....The house quilt that I blogged about on March 28.  I finally got the batting I had ordered.  I had already marked the quilt top using Barb's large fan template.  This is the first time that I have ever used the Flexion pen, but I finally bought one. 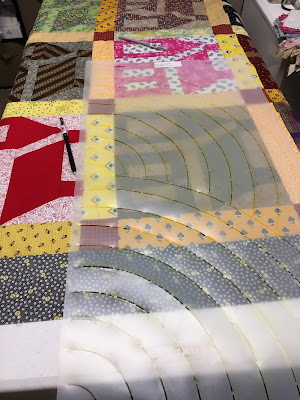 Yesterday I basted the quilt and started quilting it. 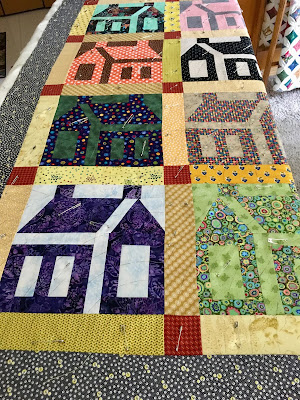 Hopefully, you all are doing well and keeping busy by quilting and possibly even cleaning out closets!  I plan on organizing at least one closet, but haven't don't it yet.  I hope I get to it before they open up the state because if I don't, I'm afraid I will put it off some more.  Yesterday I wasted a couple hours on the phone getting a quote for car and house insurance, only to find out that they recommended that I keep the company I have!  At least they were honest about it.

3 FINISHES; A LARGE QUILT, A MINI QUILT AND A PUZZLE!

This "Barn Quilt" is made with my 6" Moda blockheads that I made a couple years ago.  They came out one per week and I kept up with them for quite a while, then got behind.  I knew I wanted to make a queen size quilt and that I would probably need extra blocks, so I started making additional blocks (OK, I confess - I made extra blocks of some of the easier ones - not the 72 piece ones).  I saw a quilt that I really liked that had a barn in the middle with some rows of the blockhead blocks.  I posted about it January 28 of this year.  I found a barn that I liked better and put it in the center and added borders to make it large enough. 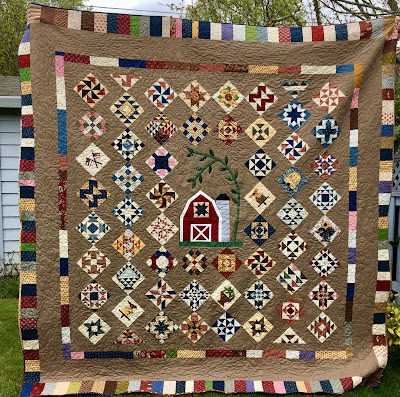 If you have any ideas for a name I could give this quilt, I would appreciate suggestions.  "Barn Quilt" isn't cutting it for me and I'm not good at naming quilts.

My DS and DSG came over for dinner yesterday (we didn't do any hugging) and I had 2 people to hold it up.  It is too large to hang on my clothes line.  It measures 94" x 96".  DGS and DH had to stand on step stools to get it high enough and then it was still dragging on the ground.  I had to take the picture quickly so I didn't have a chance to get it straightened out better (DH said to hurry).

I also finished the Honeycomb mini quilt (I won the pattern from Janet).  I like the way it turned out - I machine prepped it according to Kim Diehl's instructions and quilted it with clear thread, again according to her instructions.  I am pretty good at following directions - I would never try to figure out how to paper piece it or piece it any other way. 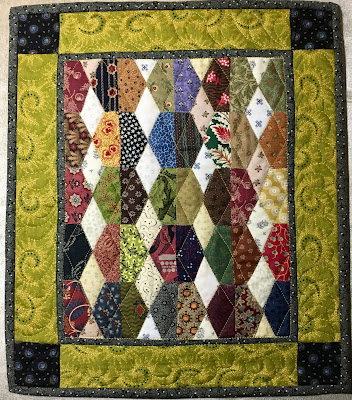 My lily of the valley plants are blooming, so I cut a few stems and put them in a tiny vase on my desk.  I have always loved the way they smell!  And they are so dainty! 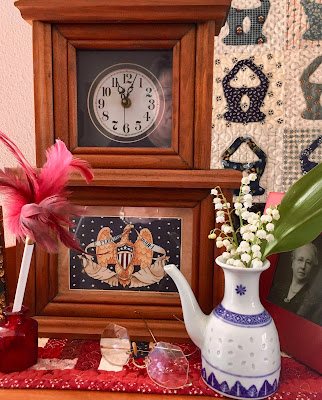 DS has a new camera, so he took some pictures of my flowers with his new lens.  They look very different enlarged and close up.

Here is the 1000 piece puzzle that we finished this morning.  Ordinarily, I wouldn't make a 1000 piece puzzle, let alone buy one, but when I saw this at a garage sale for only 50 cents and it was a Springbok puzzle (my favorite kind), plus a puzzle with all sewing notions, I couldn't resist it.  I think I have had it for at least a year, maybe two years, so I wasn't sure I would ever make it.

But, we had made all the other puzzles that we have (except the Christmas ones), so I decided to bring it down from the attic and set it up.  It took a whole week to get it finished, working on it while watching TV usually.  Turns out that it is missing one piece, which is pretty good considering it was bought at a garage sale.  The weird thing is that it had some duplicate pieces.  I had to set up an extra table to hold the trays of pieces because the puzzle took up almost the whole card table.  We're leaving it up for a while so we can look for the lost piece. 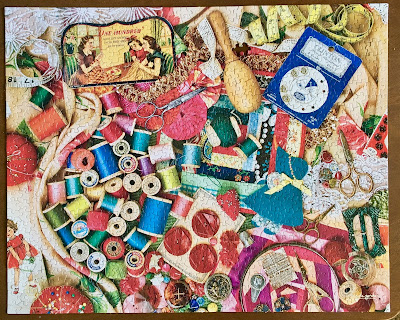 Well, quilting and non-quilting friends, it has been 4 weeks and 4 days of isolation (except for the trips to the store for food) and we are still somewhat sane!  How about you?

I guess I'm lucky to be a quilter, because the time is flying by!  I'm not bored, I'm definitely keeping busy and while I would like to be able to go out more (let's say to the LQS or something), I'm doing OK.

I finished the top of this mini, Honeycomb, by Kim Diehl.  As I told you in a recent post, I won the pattern from Janet.  This is one of those things helping me to keep busy!  It is very much outside my regular style of quilts, but it was interesting to do.  The hardest part was digging through my fabrics for all the different pieces.  Then I followed Kim Diehl's method of machine quilting with clear thread.  I wanted to do the borders with a similar chartreuse fabric, which I didn't have.  So I went online to look for some and I found the exact same fabric that Kim used for the borders, although I'm not sure it is the same color.  I used something different for the inner skinny border and corners. 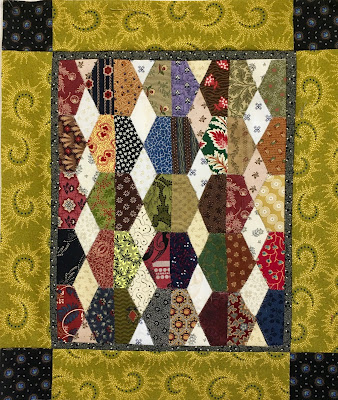 Sunday didn't lift my spirits at all because of having church on line, which is very weird.  Plus not being able to have DS & DGS over for dinner.  After DH & I ate, I texted DS to see if we could do FaceTime at least.  He responded:  we're on our way!  So we decided we would just sit on the patio and visit, which we did.  They brought me some tulips from their garden and DGS painted some egg shells for me for easter. 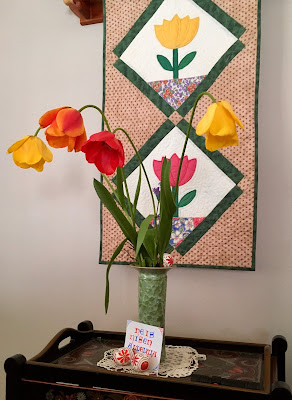 That made the day much better! 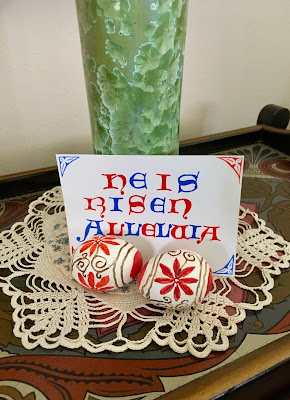 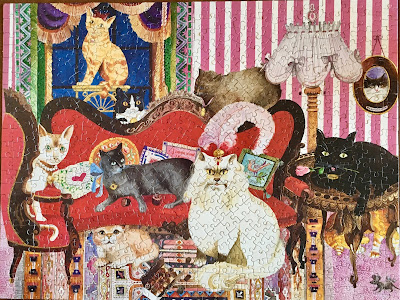 I also got this Jo Morton design almost finished - "Nine Patch Chain.  I need to put a border on it but haven't decided exactly what I will do for that. 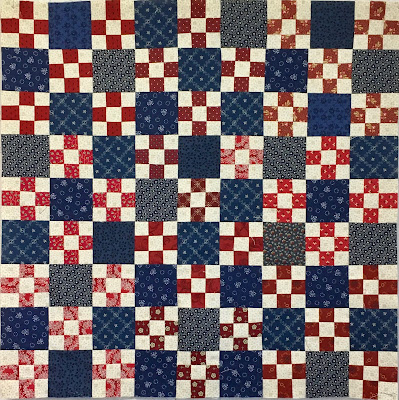 I hope you are all doing well and that we will be able to be released from custody soon!  Ha Ha!
Posted by Ruth at 4:31 PM 7 comments:

ANOTHER WEEK OF ISOLATION

I can't believe it's almost 3 weeks since we came home from Hawaii.  I've been isolated since then, except 2 trips to the grocery store and one trip to the post office.  But, somehow, I've been able to stay busy!!

This is the 3rd puzzle that we have completed - not to mention it was the hardest.  I have 2 more puzzles waiting to be made and then I may just have to get a new one. 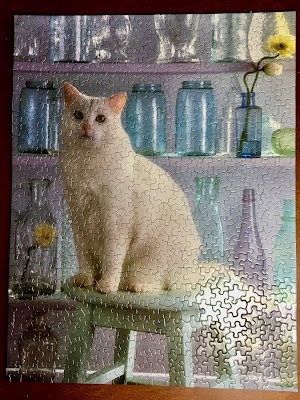 I broke down and started making some face masks.  I made some for us and family members and donated a few.  I'm not sure if I will make more or not.  If I do, I'll need to make them with tie straps because I'm out of elastic. In the mean time, I entered a drawing that Janet had on her blog for National quilters' day and I won this pattern!  I love all things designed by Kim Diehl, so I decided to start on it right away. 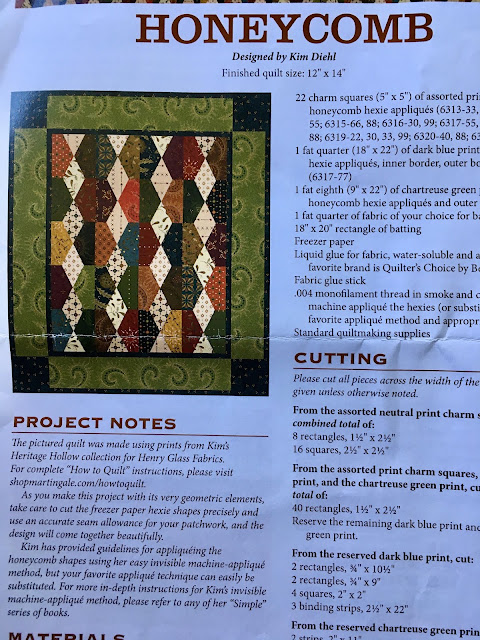 These squares are the start of the background.  Next, I will need to figure out how to make the Half-Hexies which will then be appliquéd on top of these blocks.  It looks interesting and is something different. 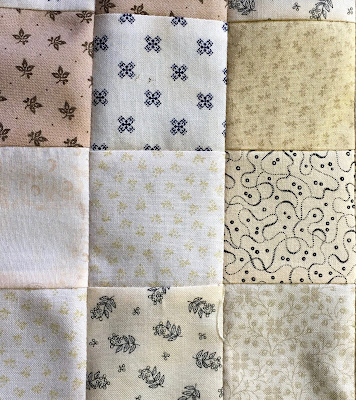 Call me crazy, but I also decided to start this Jo Morton pattern (Nine Patch Chain) from her "Jo's Little Favorites II" book.   I plan to make it a little larger than the pattern calls for by increasing the size of the blocks from 2 3/4" to 3" finished.  Not much of an increase, but I might add more blocks too. 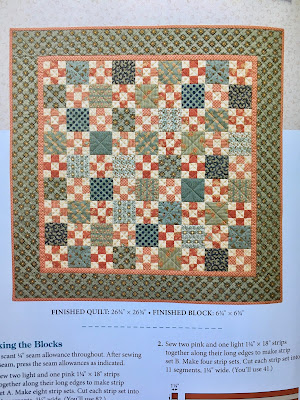 Here are some strips sewn together to make into 9-patches. 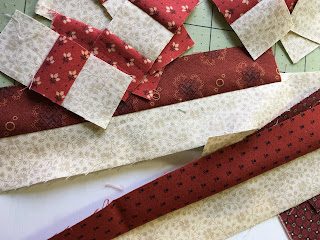 I finished quilting my Barn quilt a couple days ago and decided to make a scrappy binding.  I thought I would see what I could find in my "leftover binding" drawer.  I was surprised to see how much was in that drawer.  It seems that I put leftover binding in there a lot, but rarely take any out.  This time I only wanted civil war reproduction fabrics and I got enough from the drawer to bind about half of the quilt, so I did need to cut some more fabrics. 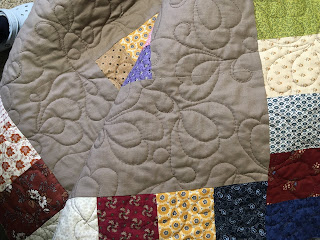 This is the pile of binding ready to go. 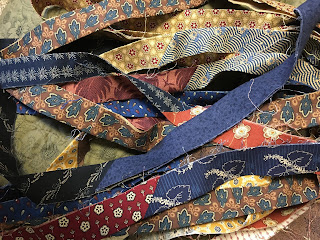 I agree with Janet, that even though I'm staying home more, it doesn't really seem like I have more time available.  I have been spending some time working puzzles and probably have watched a few movies.  Other than having a little "cabin fever" I'm doing OK and hope you are too.