How has your week been?  Mine has been pretty good even with staying home for a whole week, except to shop for groceries twice.  I have spent most of the week in my sewing room and have gotten quite a bit accomplished.  I finished 2 things.  I started this one before we went on our trip to Hawaii - well actually both of them.  And finished them this week.

I bought this panel at the quilt show in Albany, OR and made it into a wall hanging using the Secret Window Panel Wall Hanging directions from Jordan Fabrics.  You can see the directions on YouTube if you search the name of the panel in Jordan Fabrics. 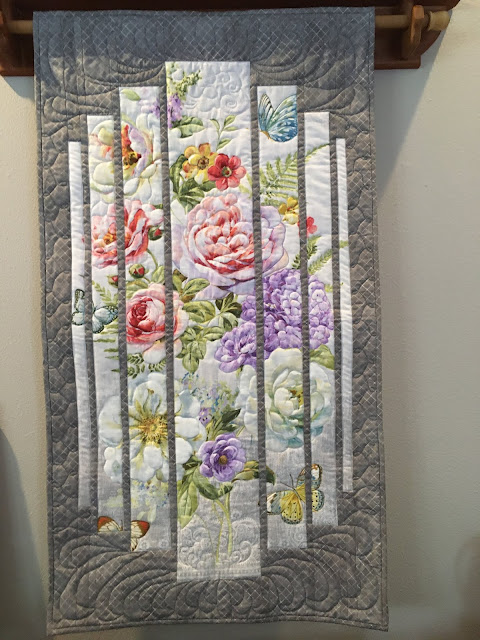 The rest of the time, I have been making house blocks.  My quilt guild isn't having a "BOM" this year, but just suggested that we make house blocks.  When I saw the house quilt that Barb made, I decided I wanted to make a quilt like hers.  You can see hers here.

Here are the blocks that I have made so far. 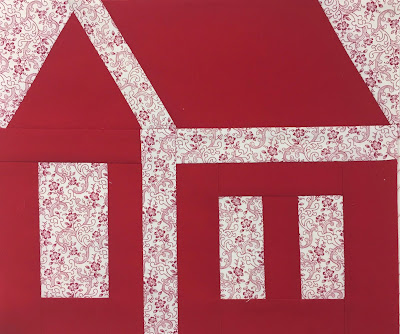 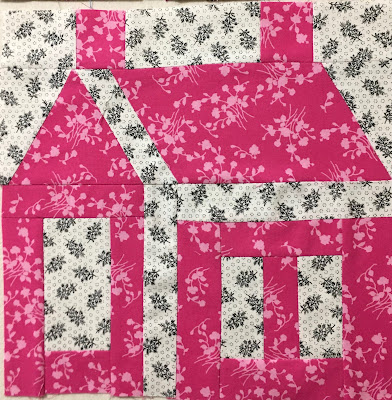 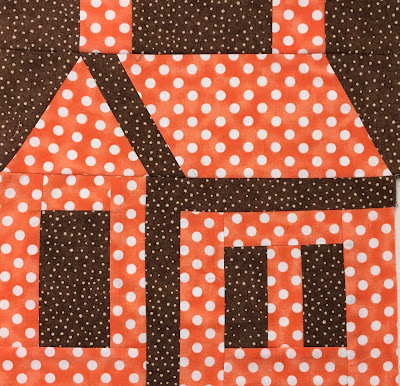 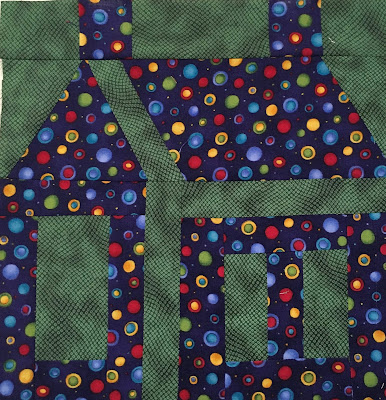 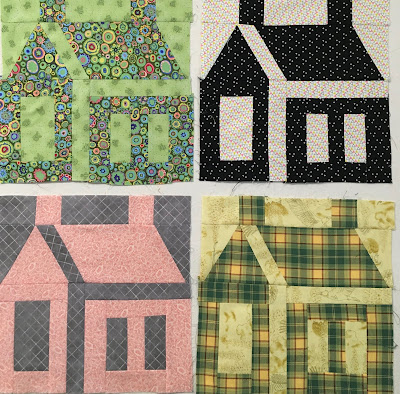 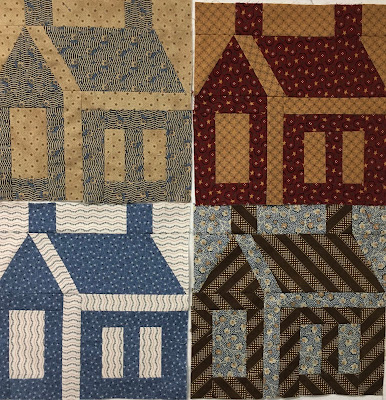 All the houses measure 11 1/2" so with sashing and a border I think it will measure about 58" square, which is a decent size.

Are you getting tired of cooking yet?  It doesn't take me long to get tired of it.  I made some soup on Monday and have more of it in the freezer.  It wasn't that good.  We also had some leftovers in the freezer that we had one night - pork chops.  Tonight we will have cabbage and sausage.  Tomorrow I am going to fix stew in the crock pot.  I will give some to DS#1 to take home.  I think we need to keep our space from him since he will be flying home from Texas and could get exposed to the virus without knowing it.

I got some flowers from a neighbor yesterday!  Wasn't that sweet?

DS#2 is a registered nurse and is taking care of corona virus patients.  He has a wife and daughter at home.

I am thankful that I have such a wonderful hobby that I can keep busy with and even make things which will brighten up other people's lives.

HAND WORK ON TRIP TO HAWAII

We had the trip to Hawaii planned for a whole year and there weren't any "rules" by the time our flight left on March 12.  There didn't seem to be any reason for not going, so we went!  During the week that we were there, things changed and things started to close.

I took 2 different hand work projects on the trip.  One was knitting dish cloths and I finished 2 and started a third.  I also worked on an embroidery project from Jenny of Elefantz.  There will be one per month and at the end it can be made into a quilt or a book!  Jenny is giving directions to make it into a book and I'm leaning that way. 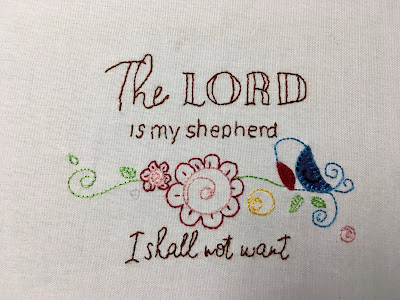 I still need to put a beak and an eye on the bird as well as another spiral under the first leaf. 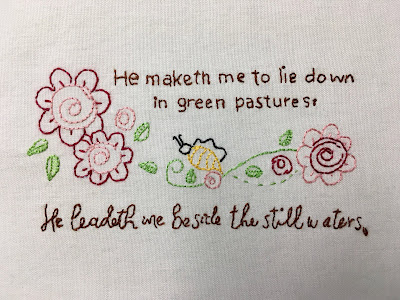 Now to the trip!  Our youngest son is in the Air Force as many of you know, and he will be retiring at the end of this month.  He had stayed at this cabin last year (the cabins are 50 feet from the beach) and this year was the last time he could reserve it since it's on a military base.  He invited us to go too.  They have 2 boys, ages 9 and 11, so of course we wanted to go to be with them.  Here are a few pictures. I'm sorry that none of the pictures have the boys faces as they don't want them put on the internet.

Last Friday we went to this beautiful lagoon to do some snorkeling and hopefully see some sea turtles.  When we got there, some people were gathered in a certain area because they saw some turtles, but then the turtles went away.  I decided to swim over to the area by the rocks (see below) and then my son pointed over to that area and said he saw a couple turtles.  I continued to swim over and got to see 2 sea turtles!!  In fact, one of them brushed up against my arm!  I was so happy!! 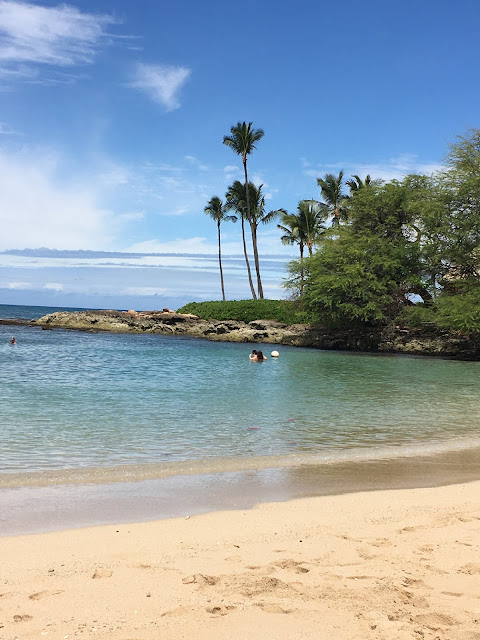 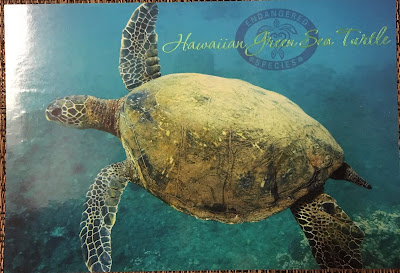 I didn't have a water proof camera to take a picture, so I took a picture of the postcard that I sent to my granddaughter.  They are just amazing!


Saturday we went to the Polynesian Cultural Center and saw various shows demonstrating some of the dances and languages of the island cultures.  This one was for Hawaii: 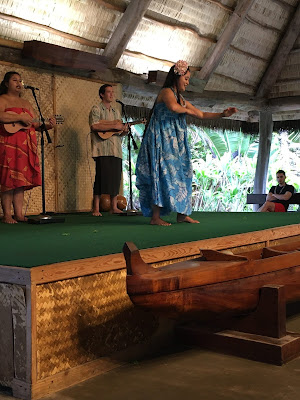 There is also a quilt shop at the cultural center where they actually have Hawaiian fabrics for sale as well as hand quilted quilts.  This description on how to make a Hawaiian quilt was on the wall: 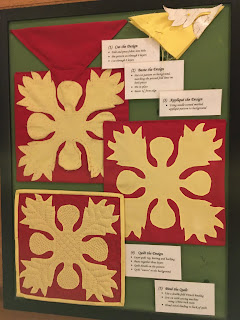 We went to Waikiki Beach for DS and my grandsons to have a surfing lesson.  The weather was perfect that morning.

This is a view down the beach and you can see Diamond Head. 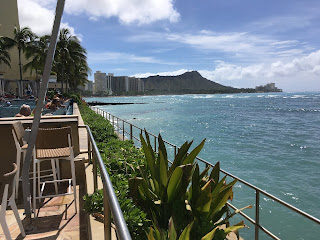 One day we went to Iolani Palace and saw the room where Queen Liliuokalani was imprisoned and the crazy quilt she made during her imprisonment.  I have a couple pictures of parts of the quilt.

We went to the the Pacific Aviation Museum (which was partly closed) in Pearl Harbor.  The Arizona memorial was closed, which was a big disappointment.

That's the trip and it was fabulous!  I can't even believe how much we packed into the week!  Our flight home was a little over 5 hours - we left Hawaii about 1:00 PM and with the time change arrived in Portland, OR about 9:00 PM.  Our son & family didn't get home until Friday morning at 7 AM and they left at the same time we did.  They got re-routed through Cincinnatti!  They live in Kansas and changed planes in Seattle, then to Cincinnati and back to Kansas.  Does that make any sense?

Now that we are home, we are going to stay away from people just in case we got some germs while on the plane coming back.  We don't want to spread anything.  Everyone seemed to be healthy, but what do we know?

Thanks for visiting.  I hope you are all doing well.  Maybe we can get a lot of sewing done since we will be home more (or less sewing if you have kids home from school).  The LQS is closed at least until April 1, but I might have enough fabric to keep me busy!
Posted by Ruth at 8:37 AM 8 comments:

I have been very delinquent concerning my blog postings. But I really have been busy doing this and that.  It seems like I have been jumping from one thing to another lately --  again.

Yesterday I had some spare time and decided to cut up a panel and make it into a window wall hanging.  I have done this before and the panel I am using was purchased at the quilt show in Albany in January.  My LQS had the grey fabric that goes with it.  Here is what I got done yesterday,

It will also have the grey fabric on each side.

I’m sorry about the pictures not showing up below. As I said,  I was leaving on a trip and I’m in Hawaii right now.  We had this trip planned for a year and decided to go ahead with it.  I don’t have my laptop with me,  just my son’s IPad and haven’t been able to get the pictures to show up.  I don’t know why they didn’t show.

In my last post I told you that I was going to Ocean Shores, Washington for the weekend.  Here are a couple pictures I took while crossing the Columbia River.  The first one is going across to Washington on the bridge. 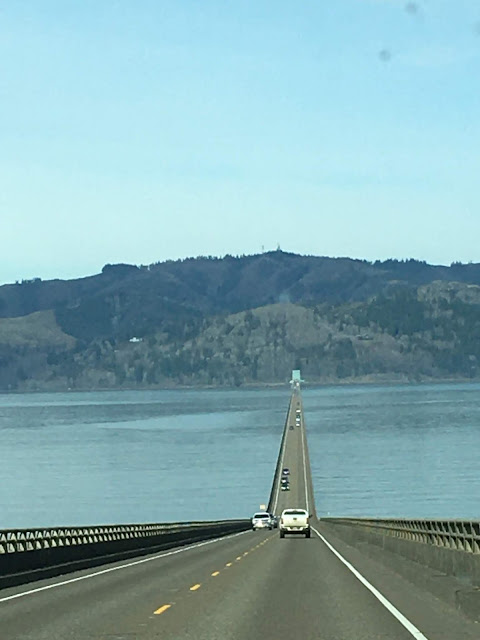 The second one is taken from the bridge looking east and if you look carefully, you can see snow-capped Mt. St. Helens (that erupted in 1980) in the distance.  It is about 85 miles away!  I had never seen it from this bridge before.  I looks like a small white mound in the distance. 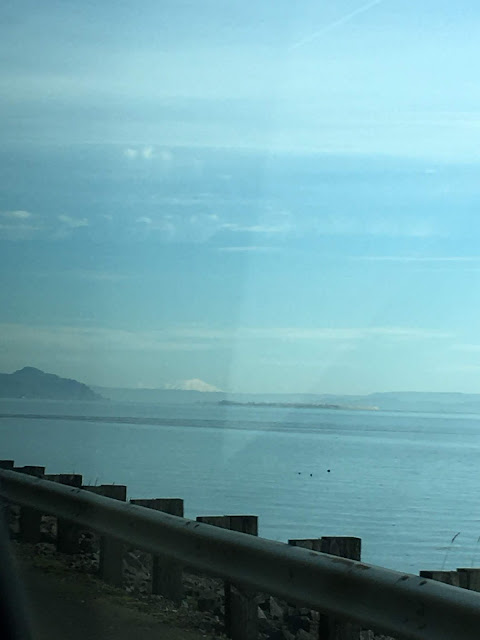 Today we are leaving on another trip - I will tell you about it later.  Thanks for visiting!
Posted by Ruth at 6:05 AM 5 comments: