SOME SHOPPING ON TRIP

I stopped at several quilt shops while on my trip and I mentioned a couple of them before, but here is a picture of some fabric.  The red and piano fabric were purchased somewhere in Virginia - sorry, no pictures of the store and I forgot exactly where it was.  The cheddar and 2 reproductions on the right are from The Quilt Merchant in Winfield, Il. It specializes in reproductions and has a great selection! 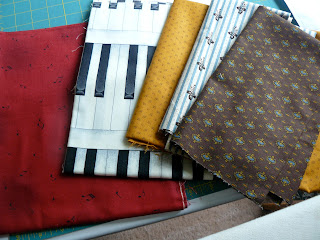 Here are the patterns I got - only one is a quilting pattern.  I'm thinking about adapting the Blue Snowman cross stitch into a Christmas stocking for the new baby coming in December.  On the left is a wool pincushion pattern (for a possible pincushion exchange?), and the other 2 are just because I like to embroider. 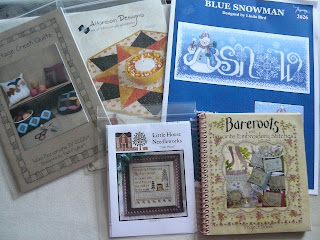 In going through my mail when we arrived home, I received a package from Canada!  I won a giveaway from Janet at Hall's Harbour Handcrafts & Quilt Studio.  It is a lovely hand embroidered pillow sham.  I love it!  Thanks so much, Janet! 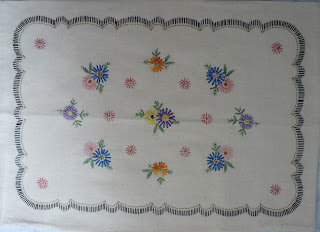 Another quilt shop that I stumbled across is Lucky 2B Quilting in Pecatonica, IL.  We were looking for a camp ground and couldn't find it, so we stopped there for directions.   DH saw this panel of construction equipment and thought I should get it for Jonah because he has a mural on his bedroom wall of a dump truck, etc. 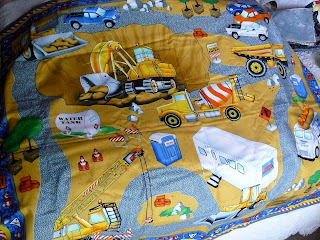 Another treasure of my Mom's that I got is a box full of paper dolls.  These have to be from around 1918-25.  Mom used to let us play with them occasionally. 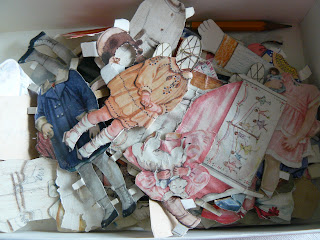 I always thought the twin buggy was so neat with a place for the faces to show through. 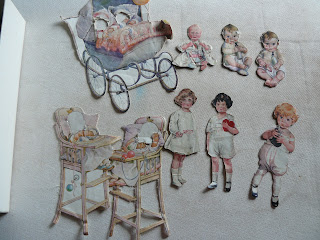 Can you believe what good shape these paper dolls are in after 90+ years? 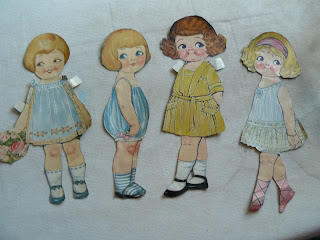 I have seen some giveaways for the Go AccuQuilt cutter and Jane is having one on her blog.  I am entering this one (and others) and for an extra entry, I'm blogging about it.  Wish me luck!
My sister has a real green thumb and this is from her garden. 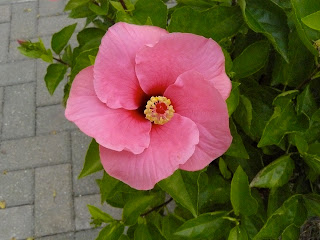 Saturday night we went to DH's 50 year high school reunion at Doubletree Hotel in Oakbrook, IL.  That morning we had attended a tour of our high school (I was a year behind him).  We were able to connect with some of his friends and the best man from our wedding. 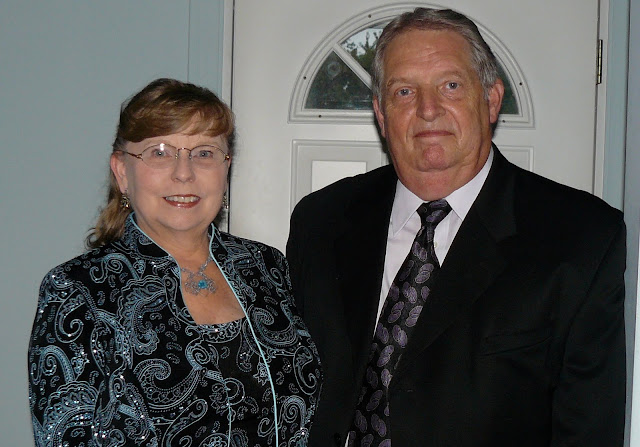 Since the dinner was at this fancy hotel, we expected a really good meal, but we were disappointed.  There were several hundred people at the reunion the room was packed.  We were squeezed around  tables so tight that we could hardly cut our chicken.  The main dish was good, but nothing special.  The rolls were stale and for desert we had a cookie!!  Am I expecting too much want a piece of cheesecake or a really nice desert?  The cookie is similar to what you would buy at Walmart's bakery.  Next year is my 50th reunion.  I guess I'll go because I would like to get back in touch with some friends I have lost touch with.
While in the Chicago area, we drove over to the neighborhood where my family lived while I was a little girl.  We moved to the suburbs when I was five years old.  The picture below is where my Dad had a grocery store in the 30's.  I won't bore you with all the other pictures we took, but it was nice to see the places I lived way back when. 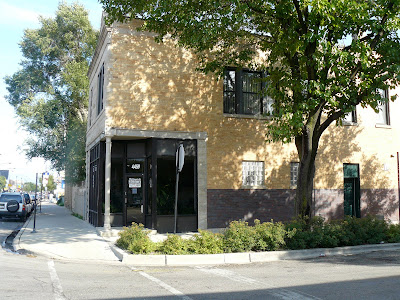 We also went to the Leaf River and German Valley, IL area to try to do some family tree research.  DH's father graduated from the Leaf River High School in 1924. 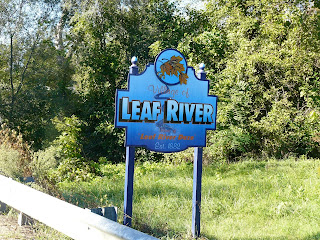 We took pictures of some old buildings and barns.  This old school house was in Adeline, IL.  Maybe it was the place where DH's father taught school for one year, but we don't know. 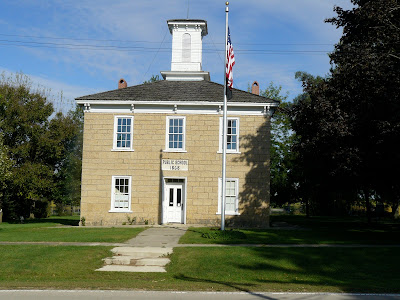 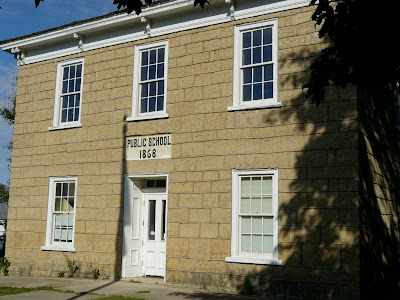 One of the many barn pictures I took.  This one was in Seward, IL near the camp ground that we stayed at. 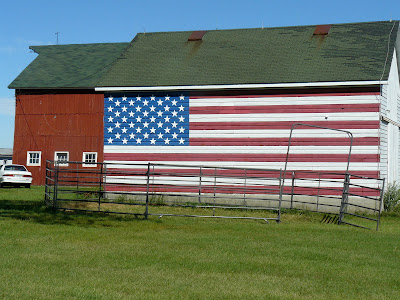 The house is still a mess and I still have lots to share.  Hope you check back soon.
Posted by Ruth at 1:08 PM 13 comments:

Late yesterday afternoon we arrived home after being gone for 5 1/2 weeks. It felt very good to be home again. We had a wonderful trip and I will expand on the last couple weeks on some other posts. Below is our stack of mail to sort through. 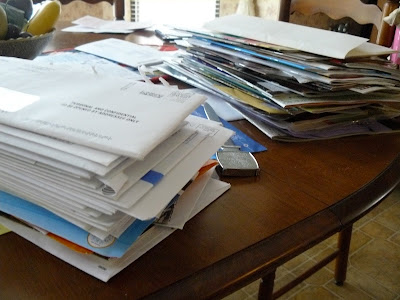 The last week we were in Illinois at my sister's house (which is the house we grew up in). While there, we started going through some of the pictures and other old items that were still left from when our parents died several years ago. We scanned lots of old pictures, looked through papers and many boxes.
My sister asked me if I wanted this antique doll - and of course, I did! We don't really know anything about it, except that it was on the shelf in Mom's closet for years. It is about 10" long and I laid it in a little doll bed for the picture. I don't think she will stay in that doll bed, though, because it is pretty new and she should have an old one (since she is old). 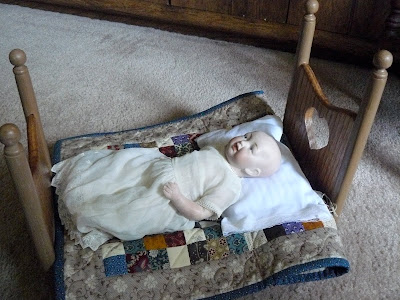 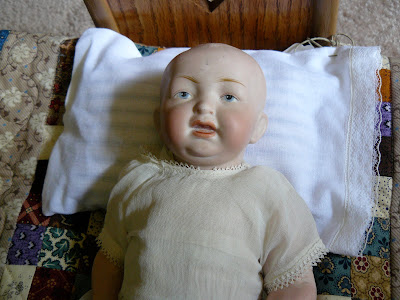 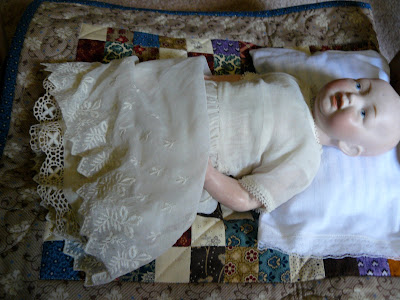 Her dress and slip are real pretty. I will wash them and fix any things that need fixing soon.
I better start putting away things and getting the house organized. I'll post more pictures soon.
Posted by Ruth at 12:18 PM 11 comments:

We spent time in amish country in Pennsylvania, New York, Ohio, and Indiana. We didn't actually plan it that way, but it ended up that way. I love their buggies and barns! This buggy was at a farm that has a little store. We were looking for baked goods, but it was the wrong day, so we bought some swiss cheese. DH saw a bag of candy that he wanted - grapefruit candy. I had never heard of grapefruit candy before, but I tried it. Wow! It was really good, so we went back for two more bags. We are bad.... 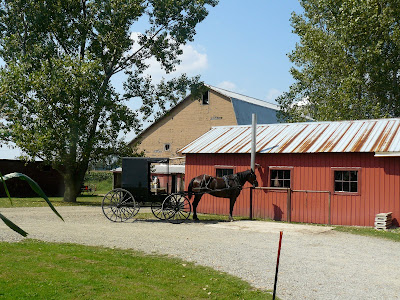 This is an amish farm. I wanted a picture of the sheep. 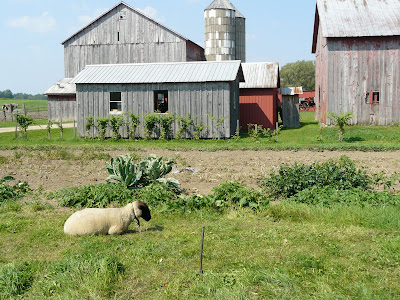 Who ever heard of a blue barn? When I saw this one, I grabbed my camera and took a picture as we drove by. Don't these people know that barns are supposed to be red??? 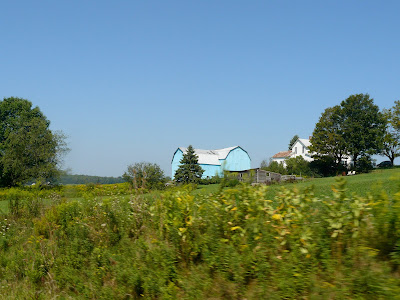 Yes, I saw some Amish quilts, but didn't feel comfortable taking pictures in their shops. I suppose I could have asked, but didn't. I did buy an amish rug, some jars of jelly and a cookbook. Now we are on our way to the Chicago area and will visit my sister, brother and other relatives. Have a nice Labor Day weekend!
Posted by Ruth at 8:20 AM 16 comments: