I can't believe it's been 10 days since I entered a new post!  I have been busy.  A number of years ago, I saw this pattern and really liked it.  Finally, I saw the pattern in a store and bought it.  Now, a few years after purchasing the pattern, I finally got around to making one - in fact, I decided to make three.  Two are for gifts and one is for me.  I've finished one and am almost finished quilting the second one.
BTW, this is my 50th post!  That's quite a few, isn't it! 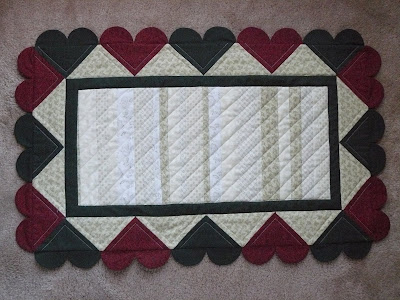 There is a special two year blogiversary going on at Abyquilt .  Go there and leave a comment to win a stitchery book!
Posted by Ruth at 8:19 PM 5 comments:

It's 5:00 AM and I can't sleep any more, so I decided to get up and enter another post.  Yesterday, I went to a quilt show with a friend of mine.  Our birthdays are both in July and we always go to lunch, exchange gifts and go to this quilt show.  She is not a quilter, but enjoys going and seeing the beautiful quilts.  I usually get a gift certificate from a quilt shop from her, which makes me happy!
The first quilt is the raffle quilt from my guild - Cedar Hill Quilters Guild.
We will raffle this quilt off in October.  We picked this quilt because it could appeal to both men and women.  Our guild president, Suzie Harris, also owner of Just Stitchin' quilt shop quilted it and did a magnificent job!  Lots of people worked on the piecing.  I even pieced a little of the paper pieced border! 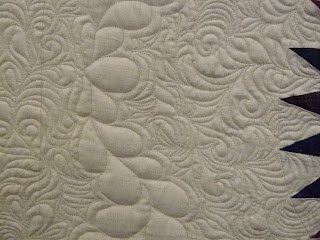 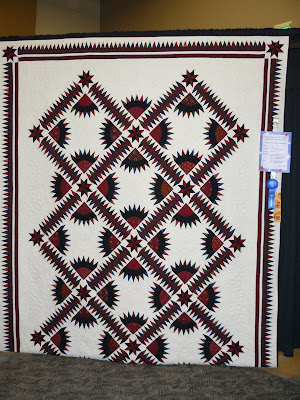 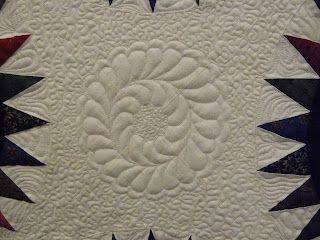 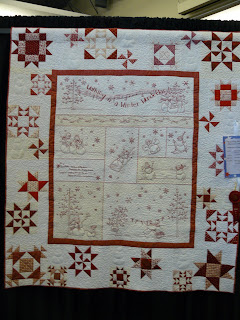 I couldn't get the pictures in the right positions, but the Christmas quilt is really popular this year.  I know a blogger who is making one and I have seen it in a few shops.
This next one was my favorite from the show and it was stitched and quilted by a man!  He did a beautiful job.  It is based on ME designs and was at least a queen size or larger. 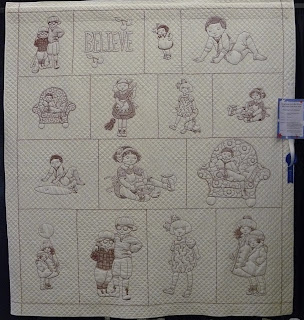 I had to put in this Texas theme quilt! 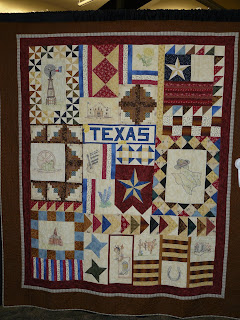 One of the reasons I couldn't sleep is that I kept thinking about all the projects I need to get done in the next month.  I'm making two Heartfelt Table Runners by Thimbleberries for wedding gifts.  One of the weddings was yesterday, but the other one is in September.  Then, we are going to Oregon to visit DS#1 and family for two weeks and they just moved into a house built in 1885.  There will be a housewarming party for them while we are there and I want to make a wall hanging for that.  My GS (12) wants a quilt for his bed (which my DIL found in a resale or antique shop).  GS likes all things old, so a quilt out of reproductions fabrics is what I am planning.  I bought some fabric yesterday and plan to put a few blocks together to take with me for his approval.
I went to 2 quilt shops yesterday looking for fabric for my GS and my DS#3 & DIL's quilt that I have been planning for a few months.  I haven't gotten too far on that one - it will be a double nine patch also in reproduction fabrics.  The best store for that in the area is Common Threads in Waxahachie, TX.  I was going to take some pictures there, but you can see pictures if you visit their web site yourself.  It is in a very interesting, old town.
My husband just shakes his head when I tell him about the projects I have planned.  I think I'm getting too many projects going.
Posted by Ruth at 4:58 AM 5 comments:

I made a couple more bags like the one I made for my sister.  I'm planning to put these on Etsy as soon as we get that set up.  We have a few other things we want to put on there as well.  I took this picture in the front of my house.  The bush is a crepe myrtle bush, which are wonderful in the Texas heat! 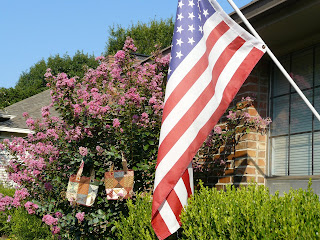 During my time in Arkansas helping DS & DIL get their house ready to move into, I had some down time to work on my Polka Dot Girls stitcheries - while sitting with Jonah on the porch while he napped, driving home in the car, etc.  I need to get some more traced to work on now. 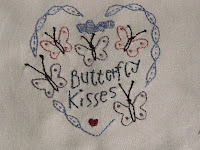 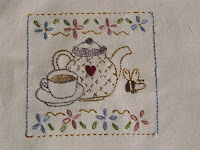 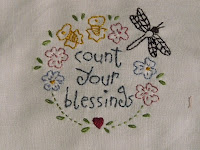 Whoops!  I just noticed that I forgot to put the yellow centers on the flowers under the teapot!
This is a set of pillowcases that my Mom embroidered probably 50 years ago or so.  I found them in a drawer after she died.  She enjoyed embroidering and she was really good at it.  I wish I was as good with the satin stitch as she was!  I would never do a buttonhole stitch border like this!  These have never been used!
The second set of pillowcases were ones that my grandmother crocheted the border on.  I have these on the bed in our guest room.  They don't really get used to sleep on!  I love having these old heirlooms from my family.    My sister has more linens from my Mom that she said she might want to get rid of ---  I said NO!  She will save them for me to look at next time I visit her.
Today I went to two quilt shops and to a quilt show in Midlothian, TX.  I will post some pictures next time! 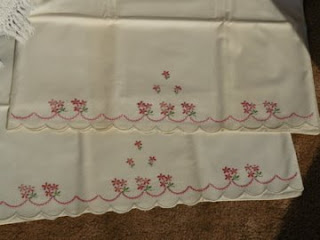 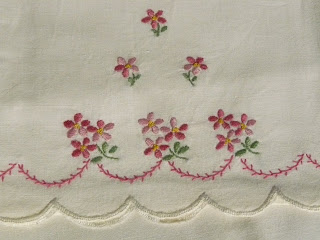 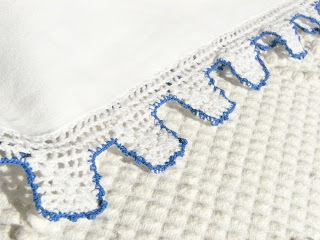 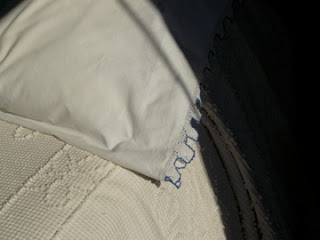 Creamy Potato Salad
6 large russet potatoes
3 hard boiled eggs
3 green onions
Dressing:
1/4 cup sugar
1/2 tsp. salt
2 Tbsp vinegar
1 Tbsp Flour
2 Tbsp water
1/2 tsp. dry mustard
1 egg beaten
1 Tbsp butter/margarine
1 cup whipping cream (don't whip)
1/2 cup mayonnaise or salad dressing
Cook potatoes in jackets.  For dressing combine dressing ingredients and cook over low heat until creamy and thick - stirring frequently.  Add butter, whipping cream & mayonnaise.  Blend well & cool.  Combine & carefully fold in dressing.  Allow salad to stand in refrigerator for at least 5 hours to  blend flavors.
I got this recipe about 40 years ago from a friend and I think it is the best potato salad recipe I have ever had.  The dressing makes the difference.  If you double the dressing and increase the potatoes (but not double), it is even creamier.  Hope you like it!
I meant to post the recipe sooner, but we went to Arkansas to help our DS & DIL get their new house ready to move into.  We decided to stay a few more days because there was a lot to do!!  And we didn't have access to the internet - or TV.  Their furniture hadn't arrived yet, so we were "camping out" in the house!  We had a wonderful time with them and our new grandson, Jonah.  He is healthy and growing and was starting to smile and coo before we left!
Robbie, the cat pictured below, caused us a lot of anxiety, though.  We had put Robbie and Maggie (both cats) in the laundry room because of having workers laying flooring, etc.  In the laundry room was a free standing cabinet.  Robbie loves to get inside cabinets.  The former owner of the house had told a friend of his that they could have the cabinet, so when he called, DS got Robbie out of the cabinet.  However, he snuck back into it and didn't say anything when the cabinet was taken out of the house and put into the pick up truck.  The men stood around the pick-up chatting for a while - not a peep out of Robbie.  DS got a phone call a little later and the man said that when he got the cabinet home, a cat ran out and was it ours?  We looked in the laundry room and, sure enough, Robbie wasn't there!!  We raced over to the man's house (20 minutes away) and looked.  Behind the house was a gulley with lots of trees and bushes.  We looked and called but no luck.  Later DS went back with some cat food, looked some more, and left the cat food.  We decided to put up some posters, so about 9:30 that night we went back to the neighborhood with the posters and flashlights.  We thought maybe we could see some eyes glowing in the woods.  My DIL & I (with baby) went across the street to look in another direction, while DH & DS went around to the back of the man's house.  DS called for Robbie and there was a very faint "Meow."  He caught Robbie by the tail - dumb cat doesn't like to be picked up and tried to get away!!  What a relief!!  Robbie is my DIL's cat and she has had him for 10 years.  It was a very stressful day, but we were so thankful to find him! 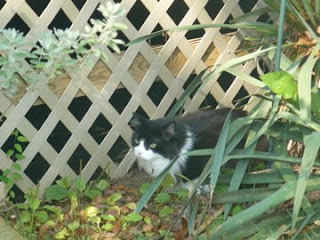 Now, we're back home and I'll be back at work tomorrow!  BTW, I did get some hand work accomplished!  I'll show you in my next post.
Posted by Ruth at 2:32 PM 3 comments:

I liked the button bag so much I decided to make two more.  They are "quilt as you go" and here it shows the first two rows pinned on the backing/batting. 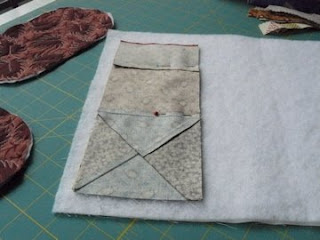 I had some of this Thimbleberries (I think) fabric left over and quilted it for the bottom of the bag. 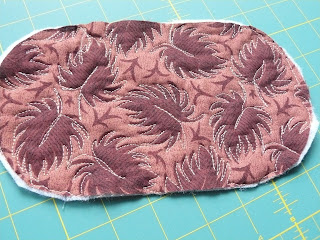 Here is my first big Polka Dot Girls stitchery.  This is fun to do and goes pretty fast.  I'm in kind 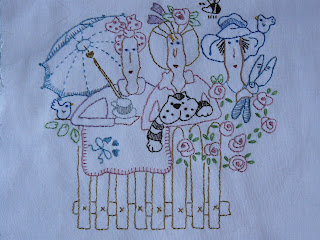 of a rush today to go to Arkansas for the weekend to help our DS & DIL get their new house ready.
I hope I'll have a little time to stitch - I'm bringing some with me, of course.  If I don't have time there, I can do some in the car on the way home.
Have a great 4th of July!
Posted by Ruth at 1:18 PM 3 comments: