Here we are at the end of 2013!  I need to show a couple items that I gave for Christmas gifts.  This table runner was made for my DIL.  She wanted a whig rose in the middle and then something reproduced from Frank Lloyd Wright's windows on each side (she majored in architecture).  I did my best, but couldn't really reproduce the window exactly due to size limitations.

Close up of the center.  I did do a little more quilting on it after taking this picture. 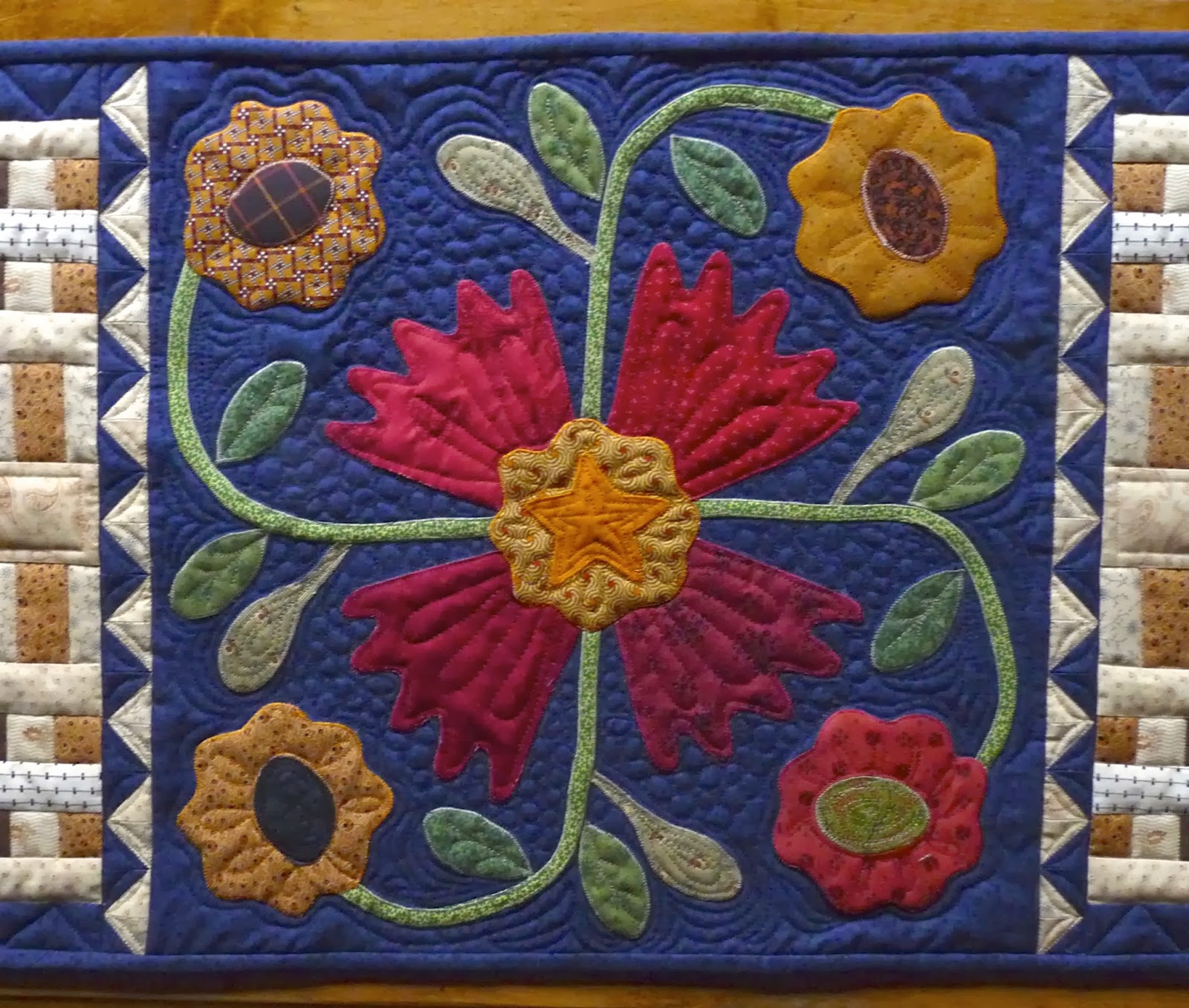 Some of you have seen this quilt from my "Secret" blog.  I made 2 of these quilts and gave them the name of "The Eagle."  Here is a picture of me with DS#3 (we spent Christmas with him and his family). 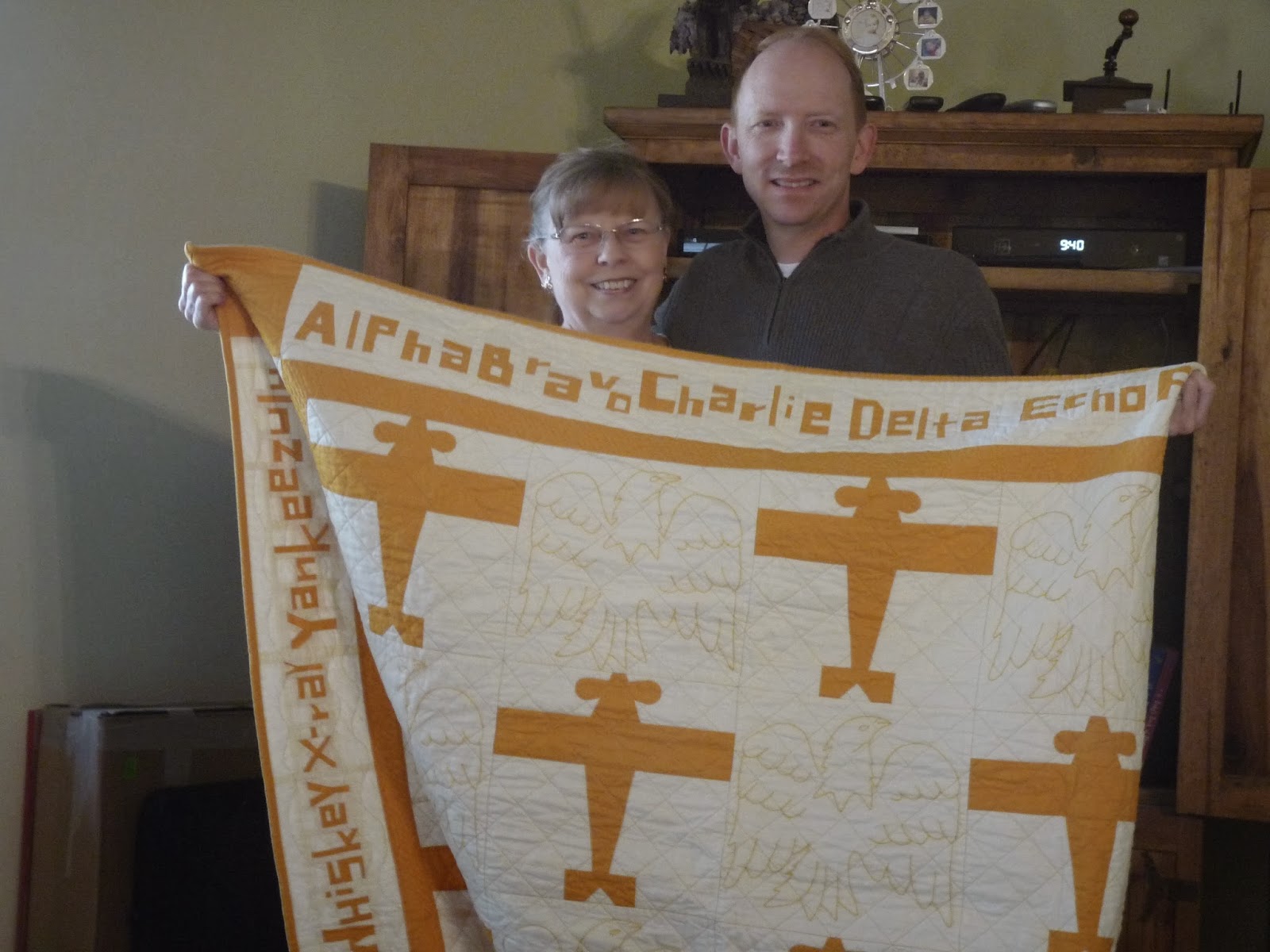 A picture of the whole quilt is below.  The quilt is a partial reproduction of the "Lindy" quilt which was made in 1930 to commemorate Charles Lindbergh's flight across the Atlantic Ocean in 1927.  Two of my sons are pilots, so when I first saw this quilt several years ago, I wanted to make it for them.  The alternating blocks have an eagle embroidered on them.  The quilt appears in "Word Play Quilts" by Tonya Ricucci.  I would never been able to piece the words without that book. 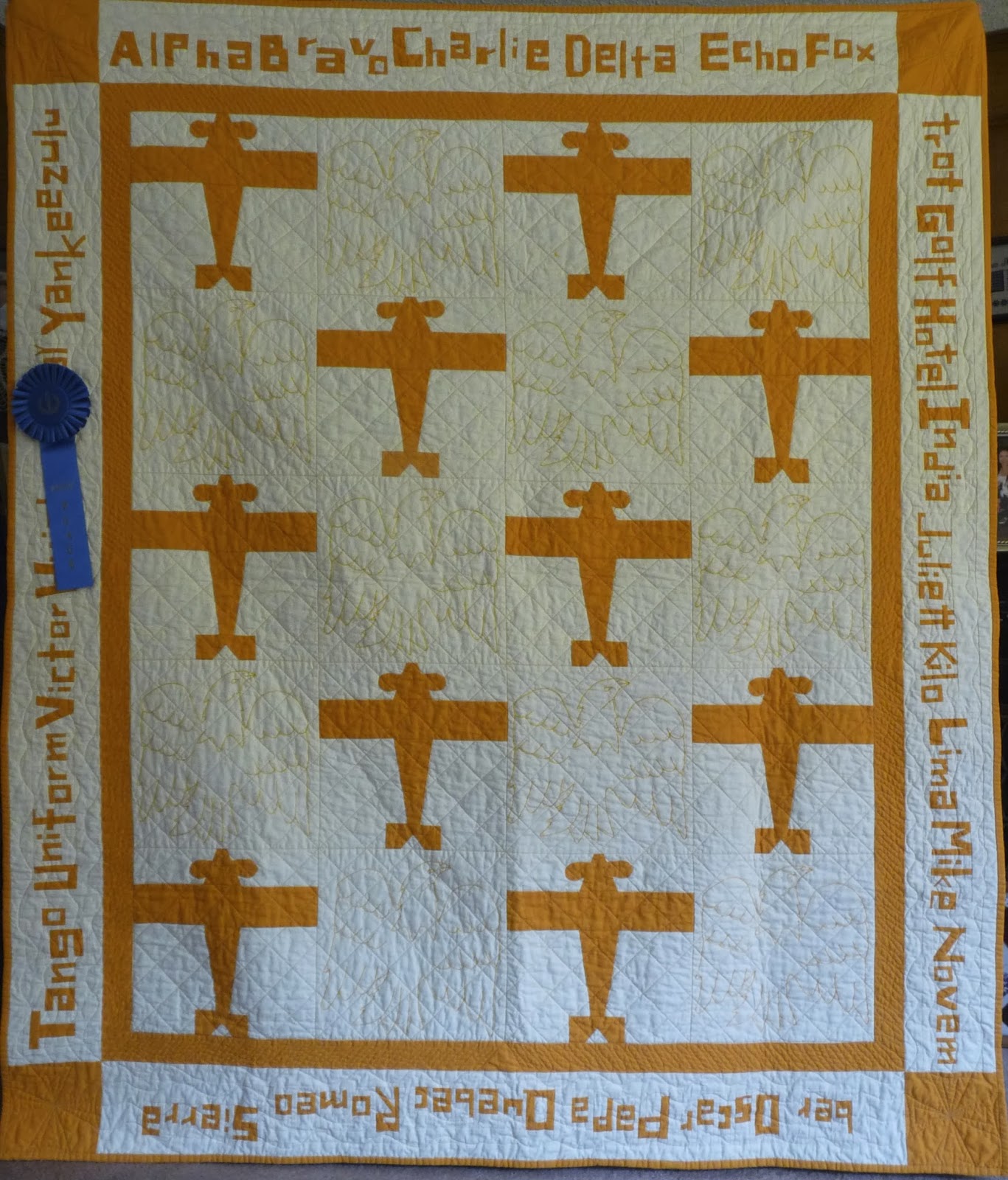 BTW, I won the blue ribbon at my September guild meeting for the President's challenge of making a two color quilt.

We spent a week with DS#3 and family.  Here are a few more pictures of the boys.  Jonah got this scooter for Christmas. 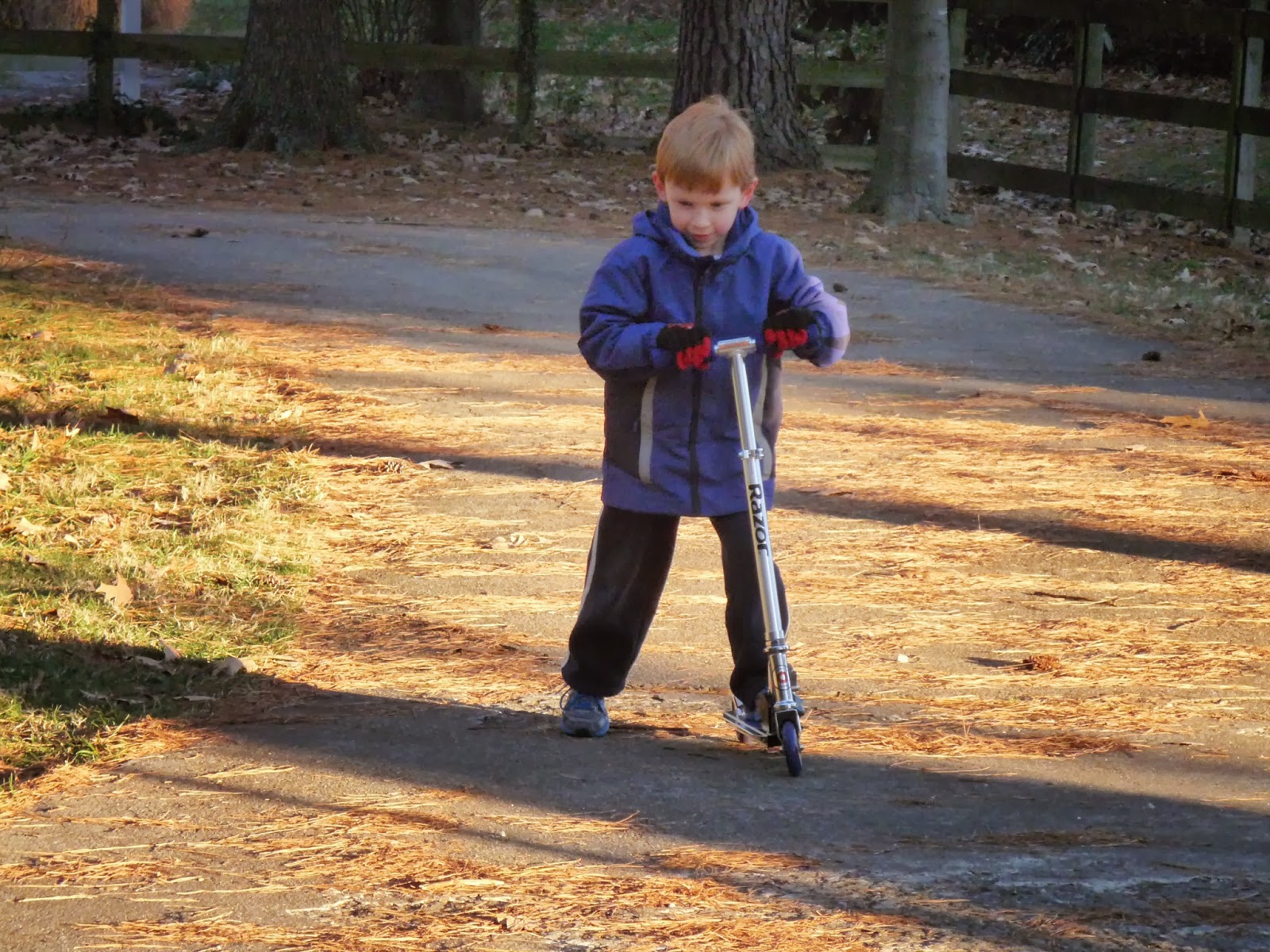 Eli's chore is to set the table for supper. 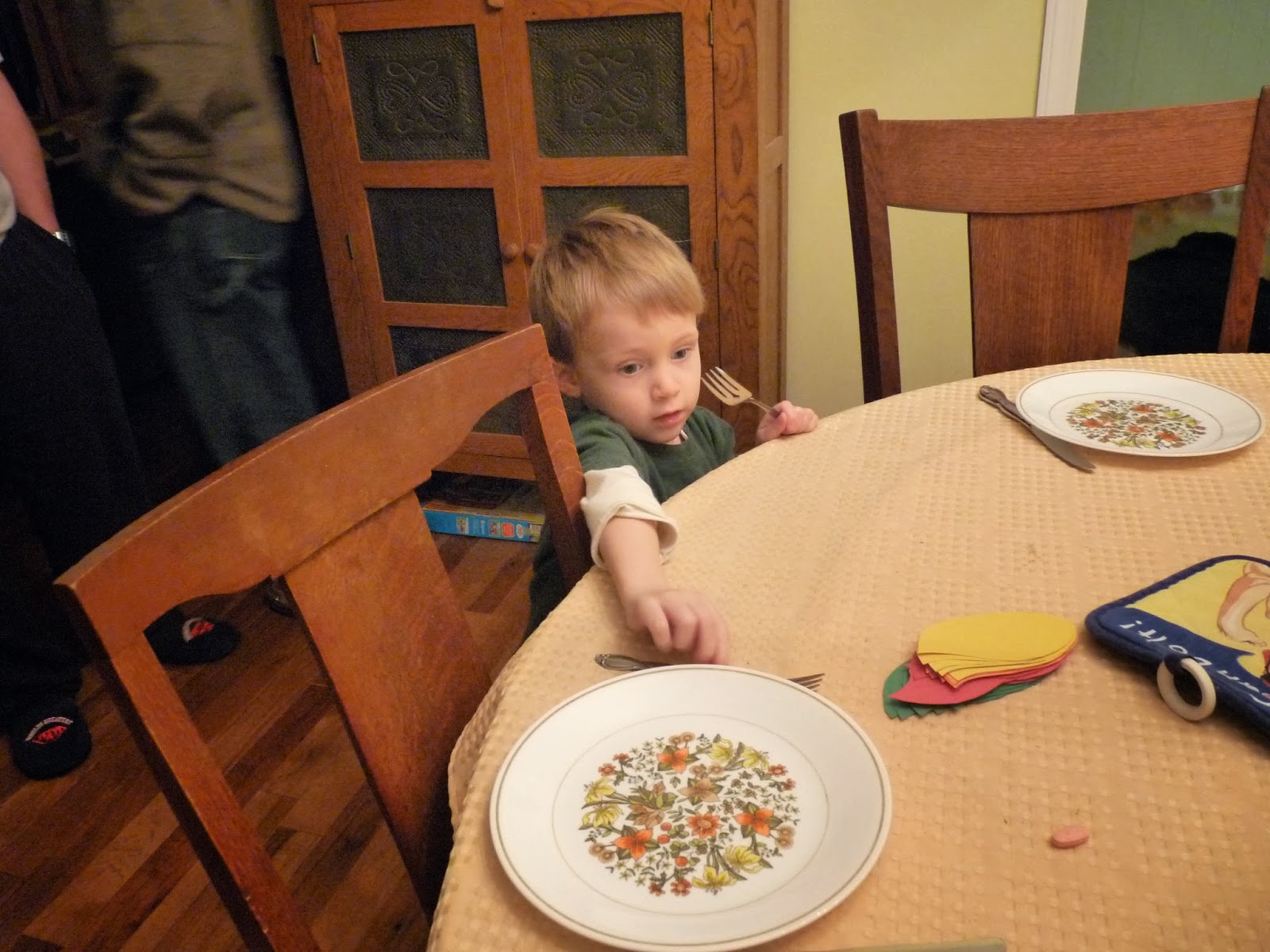 Two sweet boys with their bikes.  Eli received his bike for Christmas. 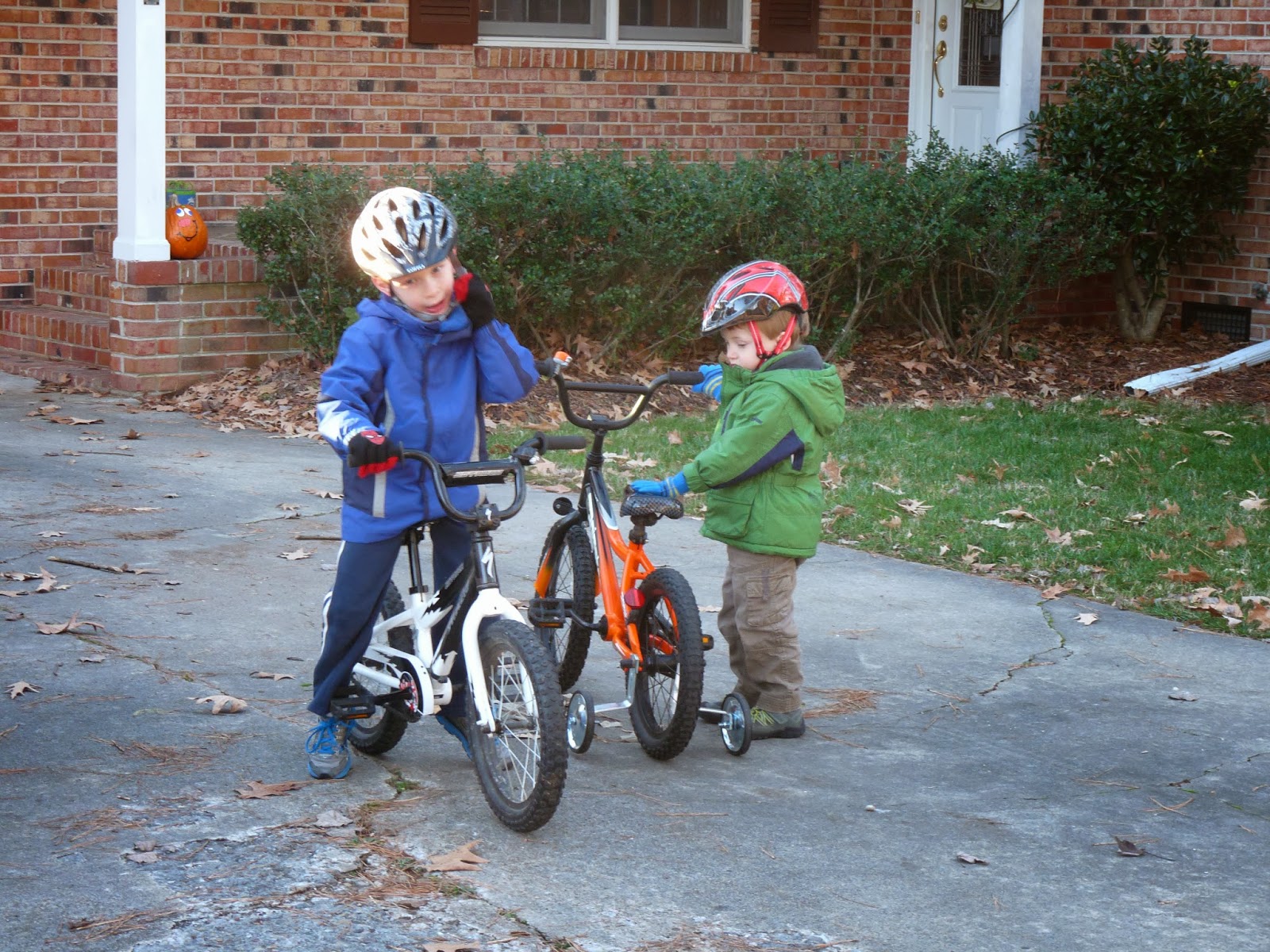 Here is something that I received for Christmas!  I have been thinking about this quilt for several years and I plan to get started on it.  I hope to join a group for encouragement.  Of course I still have several UFOs that I need to finish.  I need to review my list from January to see how I did and will report in another post. 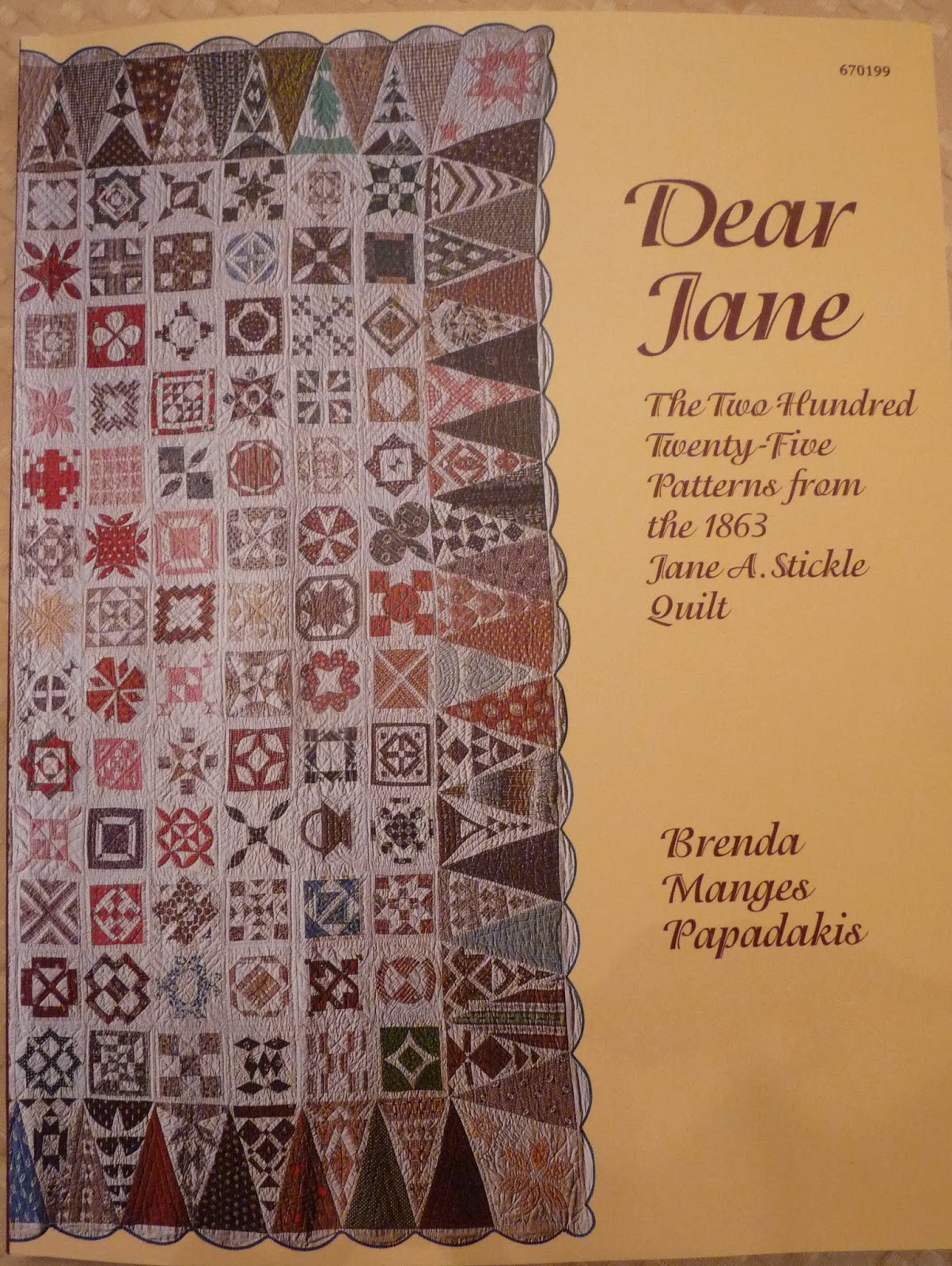 Happy New Year, everyone!  I will be looking forward to seeing what you plan to work on next year.
Posted by Ruth at 6:50 AM 13 comments:

A VISIT WITH SANTA - on the third try!

MERRY CHRISTMAS to All.  I hope you are able to be with some family or friends on this day in which we celebrate the birth of our Lord and Savior, Jesus Christ.  He came to earth to reconcile the world to God by taking our sins away and giving us eternal life.

As I wait for the sweet little grandsons to wake up, I thought I would tell about our visit to Santa.

The first try was at Busch Gardens.  The line was super long, so we decided it wasn't worth it.

Next was at the mall on Monday.  We arrived there about 4:50 PM and of course the mall was mobbed.  As we walked through stores, Jonah (age 5) was singing "Santa Claus is coming to Town" as shoppers smiled at him.  Some people even sang along.  He's not a bit shy.

When we had been in line a few minutes, it was time for Santa's supper break.  That meant waiting 45 minutes for him to come back as well as waiting for the people ahead of us (at least another 30 minutes).  Again, not worth it.

We went back yesterday morning and there was NO LINE at about 9:30!  Success at last.  Below are the pictures, who were very happy this time. 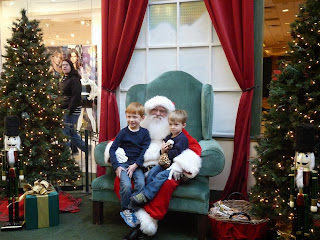 Thanks, quilting friends for visiting today and throughout the year.  I do appreciate all of you!
Posted by Ruth at 5:12 AM 6 comments:

Monday, the first thing I did was baste a table runner for one DIL and a table topper for another DIL.  Plenty of time to get these quilted….that is until my sewing machine started acting up when I was doing free motion quilting.  Uh Oh!!  In November, I took it in to be serviced because of the same problem and hadn't really been doing any FMQing until Monday.  It worked fine for cross hatching and regular sewing including zig-zag.

So, I took it to the repair shop and left it.  No word back yet.  OK.  I'll move on to something else.

Eli's Mommy suggested that I make a small quilt for Eli's giraffe, which he doesn't part with.  He has taken to putting the giraffe to bed in a bread basket and covering him with a washcloth.  So, of course, I said I could make a little quilt for the giraffe.  I happened to have some fabric with giraffes on it and fussy cut them for the quilt.  Of course, I figured the giraffe would need a pillow as well! 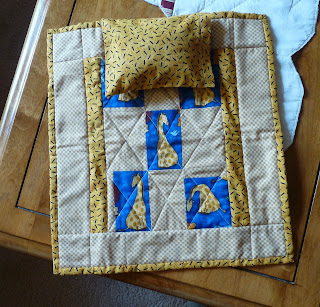 But, what about big brother, Jonah?  He has a puppy he is very attached to (in fact, 3 of them - long story).  Maybe he would feel bad if he didn't get something for his puppy.  But, since he is a big boy now (5), I decided to make him a sleeping bag for his puppy - with bigger boy fabric featuring planets and lined with airplanes.  The pillow also has an airplane pillowcase.  These two were right up my alley and I used my Featherweight to make them. 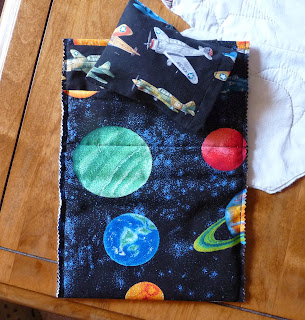 A couple other items I was able to work on -  Some dish towels for the DILs.  The red one will need  my Janome to zig zag around the appliqué… 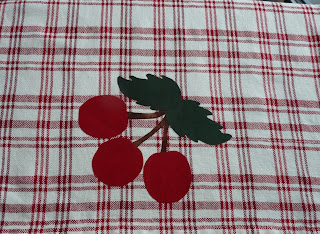 but I could sew on the rick rack with my Featherweight. 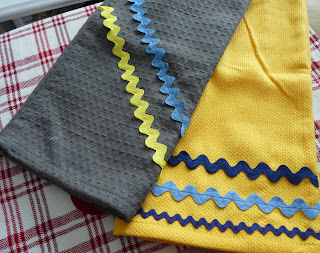 Christmas is coming soon and I need to get some gifts in the mail.   In between the sewing, I'm baking cookies and cleaning (a little).  Today the temp is going up to the 40s, and the ice is melting!  What are you up to - or are you too busy to blog?
Posted by Ruth at 12:01 PM 13 comments:

Winter weather arrived in the Dallas area yesterday and this is the view from my front door this morning.  It has been sleeting for most of the night.  Lots of schools, government agencies and businesses are closed today, so we will be hunkering down and trying to get lots done for Christmas.

We usually get one ice storm during winter, but mostly it takes place in January or February.  This is early for us.  The day before yesterday it was 80 degrees!


Here is another outfit that I made for one of Abby's dolls.  The pants are pink denim that I got from a DIL who is Abby's aunt.  She also sent me the "bling" that I glued on the pants.  I hope it sticks!  The rick rack and fringe balls were garage sale purchases.

The doll outfit is laying on top of a gift quilt that I just finished quilting and can't show yet.  There is another one just like it posted on my "secret" blog.  I just sewed on the binding and will hand sew it to the back while watching TV tonight.

Now, on to a few other projects!

Last spring I bought a "Princess" game when I went to a friend's garage sale (she was a member of my quilters' guild and was moving).  Her daughter assured me that Abby would like the "Princess" game.  Was she ever right!!!  I think we played it every day we were there!  Below is a picture of Abby, my sister, me (the winner) and DS#2

Abby loves to play with her dolls and I'm happy about that.  I participated in that play while we visited. We had several "tea" parties like the one below.  The table cloth is a play quilt I made for her. 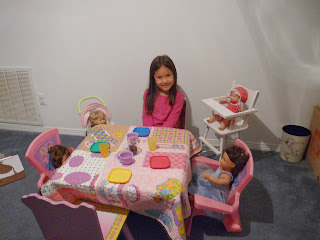 It is so cute the way she rocks her babies to sleep in her little rocking chair.  She is a real good little Mama. 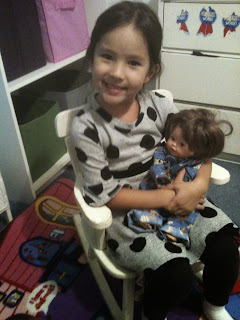 I already showed you some of the gifts we are giving her for Christmas, but while there I couldn't help notice that some of her dolls needed more clothes, so I made a couple things yesterday and have plans for more.


What are you sewing for Christmas?