During the time my DH was in the hospital, I worked on my Polka Dot Girls stitcheries.  Below are 3 of them that I got finished.  I also have 3 more almost finished, but ran out of DMC, so I went to JoAnn's (4/$1) to get that this weekend.  They will be finished soon. 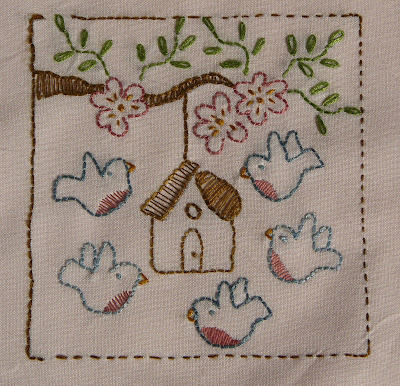 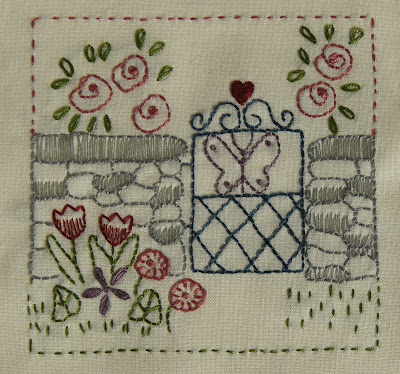 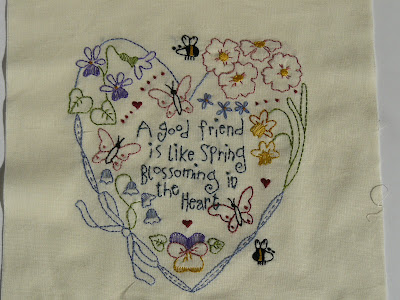 I also worked on 2 of the Noah's Ark BOMs and this one is finished.  The other one will be finished soon (also needed more DMC). 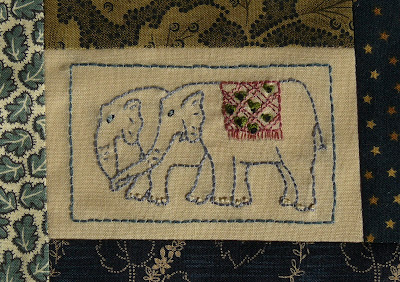 Since DH has been home from the hospital, I have been home with him and have been working on a couple quilting projects that I hope to get finished soon.  We found out that DS#2 is expecting a girl (yippee!) and I have a quilt started for her.  Tuesday it will be back to work - hope I can remember how to do things!!
Posted by Ruth at 2:30 PM 12 comments:

I came across Confessions of an Apron Queen
and decided to participate in Vintage Thursday.  I have a few vintage items that are special to me. 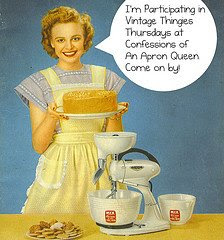 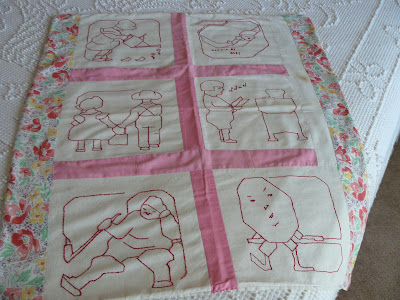 This doll bed is the only thing that my grandpa made for us that wasn't given away to other families with children.  My grandpa was a carpenter and he made various toys for all his grandchildren, including doll houses, rocking horses, etc.  I think one of my cousins still has her doll house.  My mom kept it in the store room that you could get to through her closet.  I brought it to my house after she died and put it in my bedroom.  The doll was my mom's when she was a little girl, so we figure she got it around 1920.  It is actually a boy doll, but I don't have any boy doll clothes for it.  Someday, I am planning to make some clothes for it.  I made the doll quilt and pillow case a few years ago.  This is one of my most prized possessions. 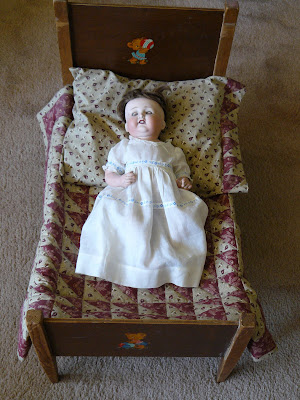 These blocks were made by my grandma and I am planning to put them together into a quilt some day.  They are made from flour sack fabric.  I'm not sure when she made them - probably in the 40's or 50's. 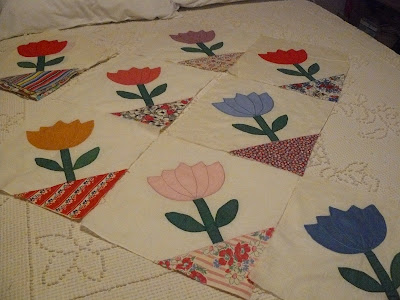 I hope you enjoyed my vintage treasures.  I'll take pictures of some others for next week.  I hope more people will participate in Vintage Thursday!
P.S.  My DH came home from the hospital on Tuesday and is recuperating at home.  He is feeling a little better each day.  Thanks for your many sweet get well wishes.
Posted by Ruth at 5:08 AM 15 comments:

We had to cancel our trip to Oregon because my DH has been sick. We kept thinking he would get better in time to travel, but instead, he kept getting sicker. I had to take him to the ER and he was admitted. We found out that he has sick sinus syndrome (bradycardia), which means that the portion of his heart that controls the electrical impulses wasn't working right and his heart rate would go real low (sometimes as low as 38). So, tomorrow he is having a pacemaker installed. Hopefully, that will make big improvements in how he feels.

We felt so bad having to cancel our trip, but maybe we can reschedule it in a month or so. I mailed the wall hanging and also the potholder pictured below . My DIL's sister gave me the "pig" fabric to make something for my DIL (she is fond of pigs). I had been wanting to try out this potholder pattern, and I'm glad I did. It was quite easy to make and will make a nice gift for other friends also. 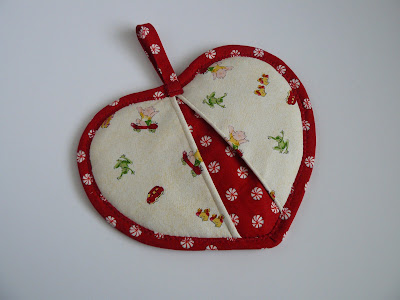 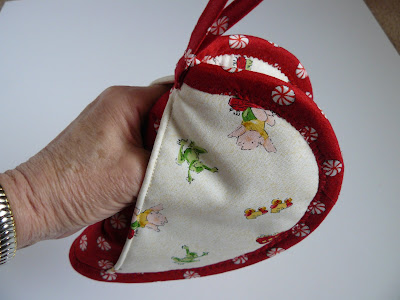 I have been staying at the hospital most of the time, but I have my Polka Dot Girls stitchery to keep me occupied.
Posted by Ruth at 6:50 PM 12 comments:

I finished the wall hanging and thought I would show some close up pictures. The panel has a replica of the signatures on the Declaration of Independence surrounded by symbols of the 13 colonies and our first 3 presidents on top. I stippled the whole center section and then stitched in the ditch around the borders. I'm getting a little more confident with the stippling, however, I did stitch over a couple times. Luckily, though, it was in sections that had the blue printing on them and it isn't noticeable. I'm making the label tonight for the back. 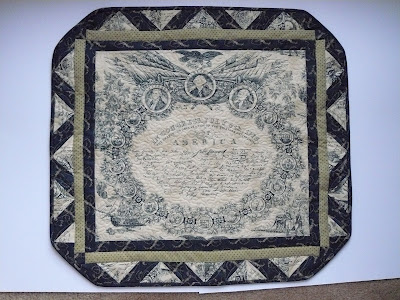 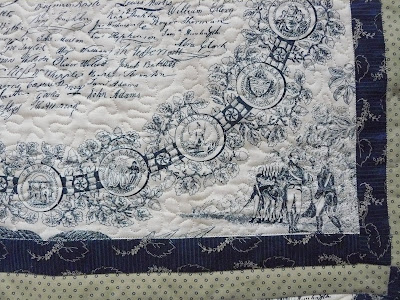 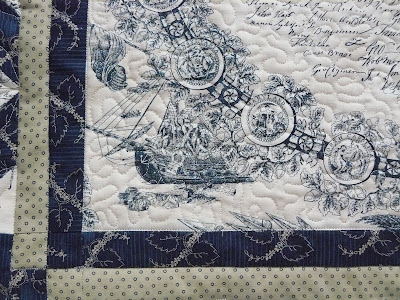 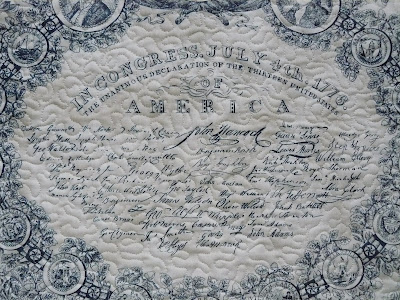 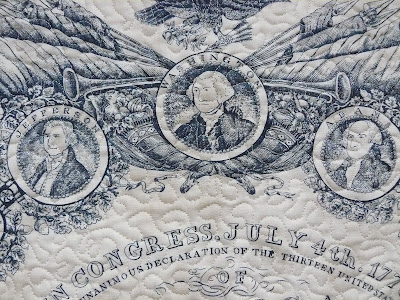 I love this fabric and when I bought it, I only bought one yard. Then I got to thinking that I might want to make more than one of these and when I went back to the store, they didn't have any more, and wouldn't be getting any. So I went on line (even my husband searched for me) and found it at a few stores. I called one and they were able to fill my order right away. It was great!
Posted by Ruth at 5:17 PM 7 comments:

I took another picture of the table runner because the color was kind of washed out on the last one.  I finished the second one and have one more to go. 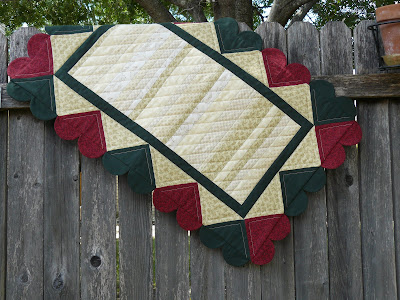 However, I have to work on a wall hanging for our DS#1 & DIL.  We are going to see them next week in Oregon and while there my DIL's sister & friend will be giving them a housewarming party, since they just moved to a new house - actually, it's an old house built in 1885.  So, I thought I would make a patriotic wall hanging which celebrates the signing of the Declaration of Independence.  The fabric panel is from Windham's Old Glory III line.  I got it sandwiched after taking the picture and am stippling the middle section. 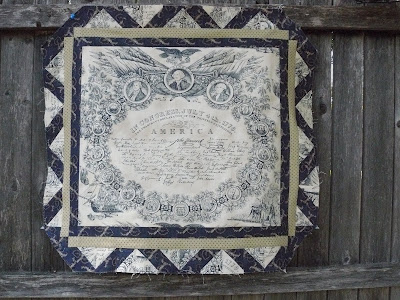 While in Oregon, I plan to visit at least 3 quilt shops.  One in Bend, OR was featured in the last Quilt Sampler magazine.  We will also be driving through Sisters, OR and I will stop at the Stitchin Post.  There is also a really good quilt shop in McMinnville, OR, which is near where they live.
I will try to post some pictures while on the trip, but we don't have a laptop, so we would have to use their computer and I don't know if I'll be able to.
Posted by Ruth at 8:03 PM 2 comments: