My grandmother, Ingeborg Opdahl, was born on Valentine's Day, 1876 in Mansfield township, Minnesota. She married my grandfather, Albert Monson, on July 1, 1899. They moved to Chicago, IL so grandpa could find work as a carpenter 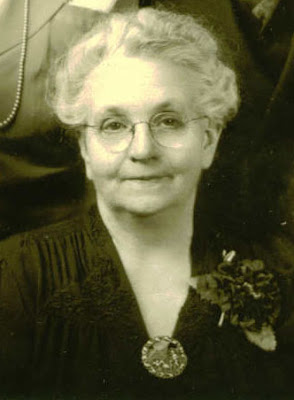 Grandma set the example of a woman who could sew, knit, crochet and tat. She used to knit mittens for all the grandchildren using up all the scraps of yarn. I still have a pair of mittens that she knit. At the time, I didn't really like the mittens very much because she used up all her scraps of yarn and they were striped and didn't necessarily match. Sometimes there would be a stripe of a different color around one thumb . She always crocheted potholders for herself and her daughters. She also tatted and crocheted around hankies. She made pajamas for her grandchildren. I remember watching her make an angel food cake from scratch with a hand whip for beating the egg whites. These are a few of the memories I have of my Grandma.
She had 5 children. Her second child was a daughter, Cora, born in 1903. This valentine is from Cora to my Grandma, as you can see in the 3rd picture. I don't know what year it was given to her, but Cora died from scarlet fever when she was 8 years old, so it could be from the Valentine's day of 1912. 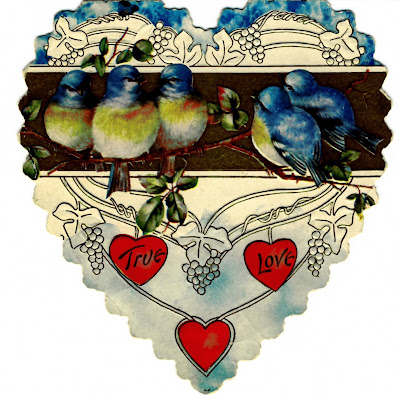 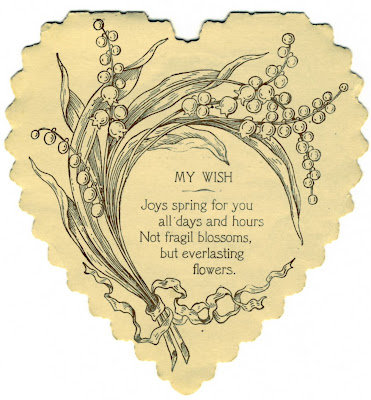 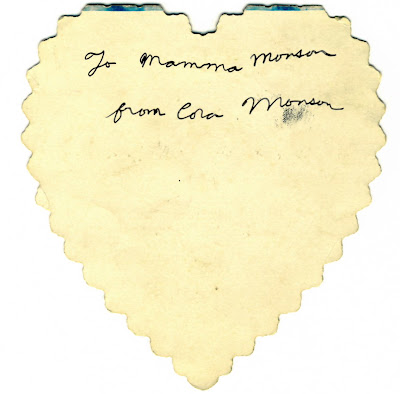 Isn't it sweet? It brings tears to my eyes to think about my Grandma losing her little girl. My Mother was just a year old at the time, so she didn't remember her sister.
I didn't mean for this post to be sad, but I wanted to put in the vintage valentine. I'm so glad I have it.