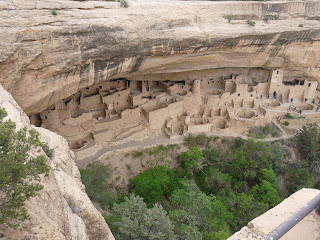 Mesa Verde is an amazing national park and we would definitely recommend it.  It preserves a spectacular reminder of the ancient culture of the Anasazi people, which is from a Navajo word sometimes translated as "the ancient foreigners."  They are now called Ancestral Puebloans.  They lived here for about 700 years until the late 1200s.
Posted by Ruth at 8:29 AM