On Friday we went to the Marsh-Billings-Rockefeller National Historical Park in Woodstock, Vermont. It is the only national park in the whole state.  The mansion was built in 1805-1807 and we were able to take a guided tour, but couldn't take any pictures inside. 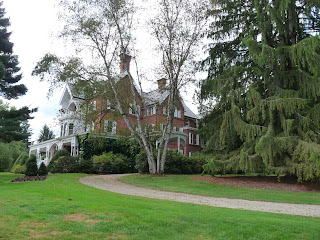 The history of the families was very interesting and ended with Mary and Lawrence Rockefeller (son of John D. Rockefeller) who donated the mansion and grounds to be a national park in 1999. 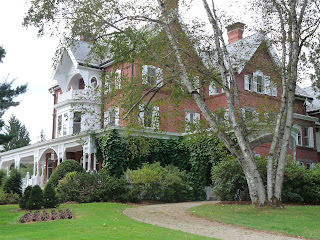 What a beautiful view from the front porch! 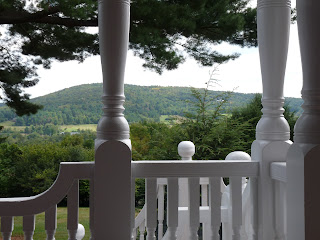 The garden is being maintained by the park service and expenses for upkeep are covered by a grant from the Rockefellers. 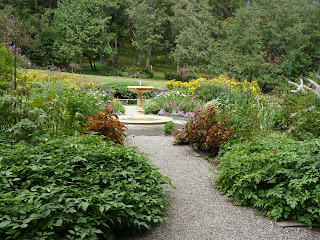 It is definitely worth seeing if you ever get to Vermont!

I forgot to add the following photo earlier that was taken by the Stone House in the Manassas National Battlefield Park in Manassas, VA.  We went here on August 31.  This is where the two battles of Bull Run was fought during the Civil War and this stone house served as a place to take the wounded.  I'm standing by the fence in case you did't notice. 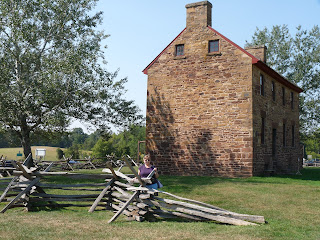 There are so many historic sites in the east and during this 150 commemoration of the Civil War, it is hard to put into words the feelings we have just seeing a film of it.  I can't imagine how the women left behind must have felt and the men going through the horror of it all.  We have so much to be thankful now, even though we do have problems.  Just think what they had to endure then.
Posted by Ruth at 4:00 AM