I finished Row J of my Dear Jane quilt plus 2 triangles.  So, I am on track for finishing the inner blocks by the end of June.  Woo Hoo!!

Most of these blocks were pretty easy and then came J-10 with 16 appliqué leaf shapes.  Last week I watched a free program from "The Quilt Show" and in it Kim Diehl was demonstrating her method of machine appliqué.  I kept looking at the 16 leaf shapes to appliqué and I decided to machine sew them with invisible thread (like Kim does).  I figured that if she can do it, so can I.  I hope I won't be arrested by the quilt police, but all that hand needlework is hard on my hand. 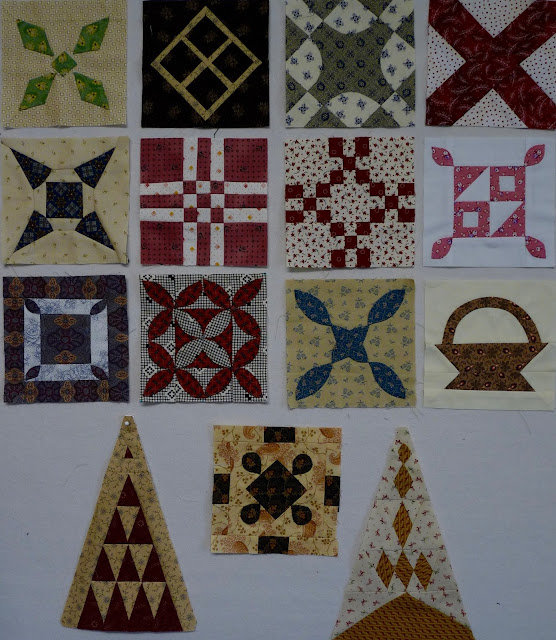 Here's J-10 in all it's machine appliqué glory!  Actually, this is the second time I did machine appliqué on a block, but the other one was only 4 tiny triangles.  Actually, paper piecing wasn't done in 1863 either, so I guess I guess it doesn't hurt to use modern techniques on appliqué.  As someone told me before, if Jane could have, she probably would have done it too!

I think J-13 is my favorite block from this row.  I really like how it looks and I love the black fabric.  My photos aren't the best because my sewing room isn't really very light even during the day.

Onward to Row K for April.  Actually, I already have the fabrics picked out and most of the blocks are paper piecing.  I'm actually getting to like PPing!!
Posted by Ruth at 11:04 PM