WARNING!!  No quilting in this post.
We are trying to eat more healthily these days and a book I have lists various foods along with their nutrient-density value.  The foods that rank 100 are romaine lettuce, collard greens, spinach, etc.  You get the picture.  So I have been eating a lot of romaine lettuce.  At first, after I washed and drained it, I would wrap it in paper towels and put it in a plastic bag in the refrigerator.  I discovered that the paper towels soon were wet and I would exchange them for dry ones.  I was using too many paper towels!
One day I had a lightbulb idea!  I made several fat quarter size pieces of muslin - I serged around the edges.  Using a piece of muslin for each "head" of romaine lettuce, I wrapped it up and placed it in the plastic bag as shown in the pictures. 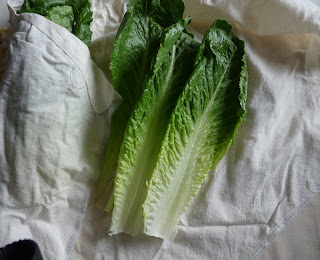 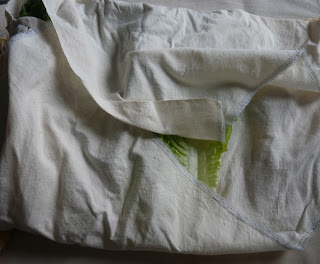 It works like a charm!  It keeps the lettuce nice and crisp and I don't have to waste tons of paper towels.  I can wash the muslin when it needs it.
Besides a salad, this is one of the things I eat for breakfast.  Six leaves of romaine, each with a little bit of peanut butter spread on it and one banana sliced thin and placed on each leaf.  It is easy and I really like it!  (the recipe is in the book "Eat to Live" by Joel Fuhrman, MD.  It calls for raw cashew butter, so my version isn't the pristine one, but I decided to substitute peanut butter. 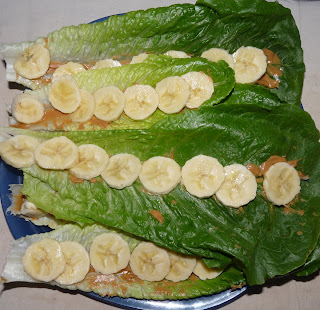 The muslin FQs are also good for draining other type of vegetables such as bok choy that I use for another salad.  I just lay them out on the muslin, cover with another FQ and continue until they are all covered.  They dry much better than when doing it on paper towels.
These will last for years by washing and reusing them, so it should save quite a bit of money spent on paper towels.  Maybe there are other ways to use the muslin FQs to replace paper towels as well.  Let me know if you think of any.
Posted by Ruth at 5:28 AM