A Wonderful Christmas is past

We had almost our whole family here for Christmas and on Christmas Eve, when our youngest son and DIL arrived, we were surprised to find out that they were 20 weeks pregnant (after two years of trying, including 2 miscarriages).  They found out that it is a boy!  Luckily, I had begun some stitchery for a baby quilt called Toyland.  Designed by Cindy Taylor Oates as a redwork quilt.  However, I had done some redwork for another quilt she designed and decided last Sept. to do a blue one.  I had set the stitchery aside before Christmas to work on other projects, so now I got it out! 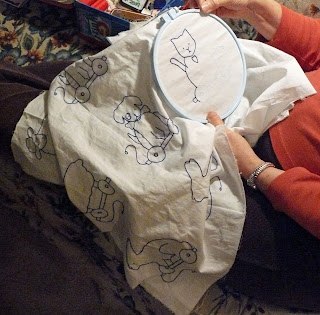 My DGD (age 15) said she wanted to make a quilt for her bed because the one I had made several years ago was getting worn out (and was really for a younger child anyway).  She designed it and picked out the fabric.  We worked on it together and she would not let me rest!  She was determined to get it done.  This picture shows it right after we had pinned the quilt sandwich together.  We did get started with tying it (which is what she wanted) and I will finish the tying and binding this week.  Next Monday I will take it to my quilting guild and then we can send it to her. 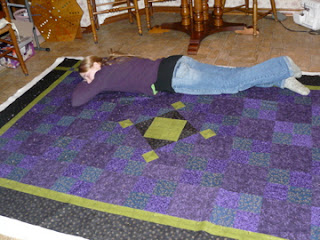 Look at the neat gift I received from my other DIL's sister!  She knitted the chicken potholder (which can double as a hat - he he)!  I also got some FQs and some note cards that she made.  She designs knitting patterns!  You can check out her blog at 2 stix in the woods which is in my links list. 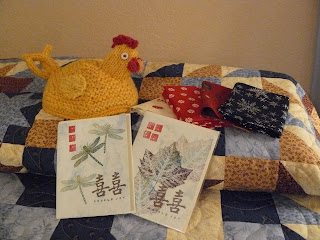 Happy New Year, everyone!
Posted by Ruth at 8:24 PM