BACK TO DEAR JANE!

Since it's been almost 3 months since working on my Dear Jane quilt, I decided I needed to take a little time and get going on my side triangles.  I made 4 triangles for the top row and I already had 6 of the top row done, so that means I only have 3 more to have the top row finished.

They keep getting more complicated it seems.  The first one in the photo, #7, was the worst.  The red and white one was the next worst.  For it I paper pieced the two diamond shapes near the bottom and the only hand appliqué I did was the rounded humps on the bottom and they didn't turn out even, but will stay as they are.

On Thursday, Abby came over to sew.  I thought she wanted to make a pillow, but she said she wanted to make another doll quilt instead.  She picked out the teddy bear fabric for the top and I was fine with that as it was a lot faster to get the top done since all she needed to do was add the borders.  Here she is pin basting the layers.  She kept wanting to put the pin through my cutting mat! 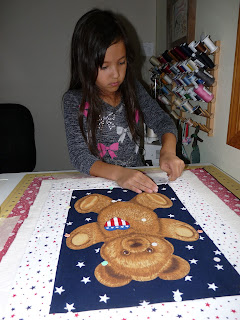 Then she stitched in the ditch with navy blue thread and only veered off into the white 2 times and it doesn't show very much. 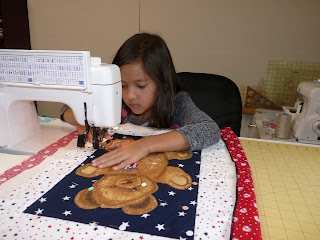 She wanted me to do the quilting in gold thread, so I proceeded to quilt around the teddy bear, but the gold thread kept breaking, so once I got totally around him, that was it for the gold thread.

Then I remembered I have some "glow in the dark" thread and I used that to outline the stars, teddy's heart and do some top stitching in the white borders.  She was thrilled at how it looked in the bathroom with the door closed!

By that time she was DONE sewing for the day.  All we need to do is turn the backing over for the binding, which we will do soon.  She starts school on Tuesday, so there won't be as much time available.  It was a fun day for both of us!
Posted by Ruth at 10:49 AM