I have been a slacker for too long!  My last post was about summer finally arriving and now we are getting close to summer being over.  It has been a very busy time for me.

On July 27 DH had a TIA (transient ischemic attach)  aka mini stroke.  His symptoms were loss of balance, weakness on the right side and I heard him fall in the bathroom at about 5:00 AM.  I got up and he was on the floor and told me he had fallen 3 times prior to this.  I knew we had to go to the ER immediately.  We got there about 5:20 AM and after tests and CT scan they told us of the diagnosis.  He stayed in the hospital over night for observation and is now using a walker to get around.  Hopefully, he will be able to gain his strength back  on his right side.  The veins in his head were constricted but not blocked and no bleeding or blood clots.

Now, on to some quilting news.  I went to a quilting retreat this past weekend which was just during the days - not overnight.  It took place in the activity room of the fire department in a nearby town and was organized by one of the members of my quilt guild.  We had a mystery quilt to make and were told to bring fabrics of certain sizes and amounts, but not having any idea of what the quilt would be like it was just a guess.  At the last minute I threw a FQ bundle in that I had gotten at the quilt show in Corvalis (2 posts back).  It was cheap and was fabrics that I normally wouldn't buy.  But, those fabrics turned out to be perfect for this project!  Here is a picture of the wall hanging that I made - not quilted yet. 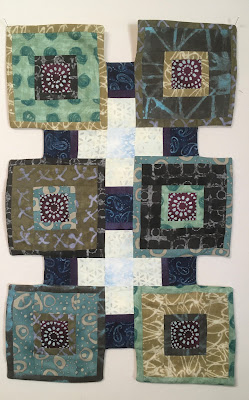 It measures about 24" x 16" and is not something that I would normally make, but I really like it!  Of course everyone's was different and they all turned out really nice.  We also had a lot of time to work on some of our own projects, which I did but not finishing anything.  I will do another post about those.  A good time was had by all and that included delicious food!
There were prizes and I won this bundle of 30s fat eights!!  I love it! 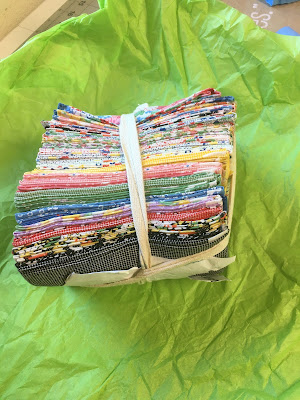 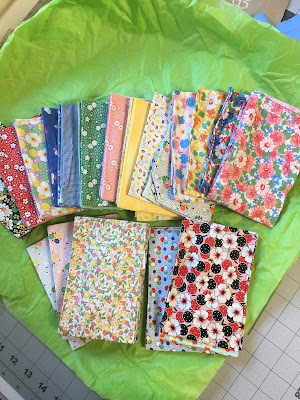 I hope to make something with these soon.  Any suggestions?
Last Thursday I was running some errands and while trying to enter a shopping center that was very busy with cars and trucks coming and going, I turned too soon and my car ended up on top of a large bolder with the right tires in the air!  It was very bizarre!  I called AAA and fortunately they arrived in about 15 minutes and I had them take the car to the Buick dealership so they could see if there was any damage to the car other than the body damage on the passenger side.  We only have one car & DH couldn't drive anyway, so I called my next door neighbor who informed DH about what happened and then picked me up.  Just what I needed right now!  The next day I got the car back with the good news that it is not damaged in any mechanical way, so I got it back in time to drive to the retreat!  We will figure out what to do about the minimal damage to the side of the car later.
I'm sorry for being a slacker about posting!  I'll try to be better.  I promise that I have been sewing a lot - mostly some extra orders for Etsy customers.  Next weekend there is an outdoor sale event nearby.
Thanks for visiting!