It's been a while again.  I have been very busy and it won't be slowing down until the end of the year.  I have several craft shows scheduled from now until a couple weeks before Christmas so a lot of my time gets used up preparing for those.

This week I noticed that my grandson keeps wearing the same mask that I made him several months ago and when I asked him about it, it said he had lost a few.  So I decided I better make him a few more.  While I was at it, I made some other ones for DH, myself (although I don't really need more) and friends.   I noticed some plaids in the closet and thought that would be good for men.


I also got  Lori's quilt-a-long instructions for this week.  So far, I am keeping up with it.  I'm not sure how long it will continue.  Here's what I have so far. 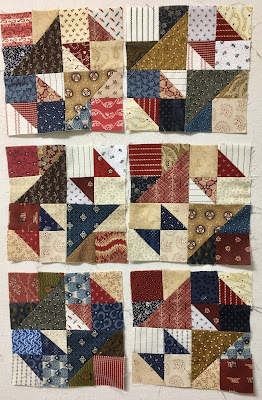 I hope it's not too scrappy!  It's hard to know what arrangement to do when you don't know what it is going to look like when it's finished.

Now, I will be working on a quilt that my granddaughter helped me with when we visited in Florida.  She said she wants it, so I will be sending it to her for her birthday.  I'm getting ready to put the borders on and will post it soon.