Quilt of Valor for my Son

I just finished the top of this quilt for my son.  It's not an official "Quilt of Valor" because I'm making it myself and I'm not going through the QOV organization.  DS is retiring from the Air Force, where he served for 23 years and we are very proud of him.  He was a Lieutenant Colonel C-130 pilot.  I plan to baste and quilt it next week. 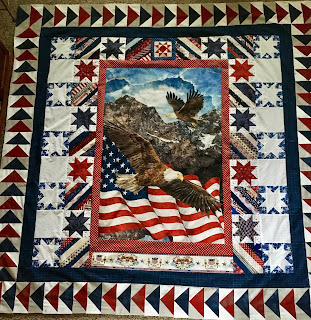 He is supposed to have a retirement ceremony June 8, but we don't know if that will even happen.

I needed to get the red, white and blue "grunge" fabric that I wanted to make the flying geese out of and since our LQS has been closed I emailed a friend who works at the LQS in our town to see if they were open or would let me buy some grunge.  She said that they aren't open yet, but they are working on putting all their fabric on line and she would be working on Monday.  I went over there on Monday and was able to get the grunge.  I should have purchased the backing the same day but didn't, so a friend and I went there yesterday and they are not open yet, but fortunately, I was able to get the backing, so I will be basting it on Monday.

Our son and his family have all been studying at home:  2 boys doing their school work on line (they are finished now), our DIL taking graduate classes on line also, and DS studying on line for his new job which will be starting soon, I think.  They sent us pictures of the boys at a restaurant with huge pancakes - the first time they could go to a restaurant to eat!

Oregon is starting to open up as well as long as there is 6 feet between tables in restaurants, etc., etc.  Yipee!!